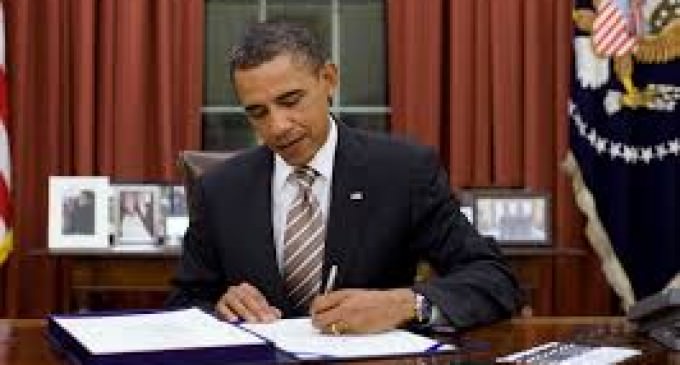 Through executive action, Obama has banned ammo for the top-selling AR-15 style semi-automatic, labeling them ‘cop killers', and The Bureau of Alcohol, Tobacco, Firearms and Explosives will put the ban of 5.56 mm ammo on a fast track, which already driving up price and demand.

Wednesday night, Rep. Bob Goodlatte, the Republican chairman of the House Judiciary Committee, stepped in with a critical letter to the bureau demanding it explain the surprise and abrupt bullet ban. The letter is shown below.

The National Rifle Association, which is working with Goodlatte to gather co-signers, told Secrets that30 House members have already co-signed the letter and Goodlatte and the NRA are hoping to get a total of 100 fast.

“The Obama administration was unable to ban America's most popular sporting rifle through the legislative process, so now it's trying to ban commonly owned and used ammunition through regulation,” said Chris W. Cox, executive director of the NRA-ILA, the group's policy and lobby shop. “The NRA and our tens of millions of supporters across the country will fight to stop President Obama's latest attack on our Second Amendment freedoms.”

At issue is so-called “armor-piercing” ammunition, an exemption for those bullets mostly used for sport by AR-15 owners, and the recent popularity of pistol-style ARs that use the ammo.

The inexpensive 5.56 M855 ammo, commonly called lightgreen tips, have been exempt for years, as have higher-caliber ammunition that also easily pierces the type of soft armor worn by police, because it's mostly used by target shooters, not criminals. The agency proposes to reclassify it as armor-piercing and not exempt.

But now BATFE says that since the bullets can be used in semi-automatic handguns they pose a threat to police and must be banned from production, sale and use. But, as Goodlatte noted, the agency offered no proof. Federal agencies will still be allowed to buy the ammo.

“This round is amongst the most commonly used in the most popular rifle design in America, the AR-15. Millions upon millions of M855 rounds have been sold and used in the U.S., yet ATF has not even alleged — much less offered evidence — that even one such round has ever been fired from a handgun at a police officer,” said Goodlatte's letter.

Even some police don't buy the administration's claim. “Criminals aren't going to go out and buy a $1,000 AR pistol,” Brent Ball, owner of 417 Guns in Springfield, Mo., and a 17-year veteran police officer told the Springfield News-Leader. “As a police officer I'm not worried about AR pistols because you can see them. It's the small gun in a guy's hand you can't see that kills you.”

Many see the bullet ban as an assault on the AR-15 and Obama's back-door bid to end production and sale.

Groups like the National Shooting Sports Foundation suggest that under BATFE's new rule, other calibers like popular deer hunting .308 bullets could be banned because they also are used in AR platforms, some of which can be turned into pistol-style guns. “This will have a detrimental effect on hunting nationwide,” said the group.