You might not think so, but remember, your opinion doesn't matter to the Obama Regime and a new ‘Executive Fact Sheet‘ issued January 3rd puts the decision in the hands of the President and his agencies. Rest assured, if he decides you are dangerous your Constitutional rights are now in jeopardy. With this fact sheet, Barack Obama is effectively stating he will be the one to decide who is allowed to own a gun.

[The fact sheet] purports to establish new guidelines for “keep[ing] Guns out of Potentially Dangerous Hands.”

What President Obama — a former part-time law professor — seems not to understand is that every time he issues some executive order, presidential finding, or “fact sheet,” he is exceeding the constitutional limits on his power and thereby violating his oath of office.

First, Article I, Section 1 of the Constitution grants federal lawmaking power exclusively to the Congress. Regardless of the word he uses to describe it, any time the president “tweaks” a law or issues an executive order covering something other than the narrow limits allowed to such directives, he is making law. He is uniting in his hands all the power of the executive and the legislative branches, thus becoming our Founders’ very definition of a tyrant.

Next, there is the particular usurpation on display in this latest edict.

As is the custom of the federal government, President Obama sets up his eradication of rights as a last resort effort to protect the people of the United States from themselves. He writes: “Today, the Administration is announcing two new executive actions that will help strengthen the federal background check system and keep guns out of the wrong hands.” 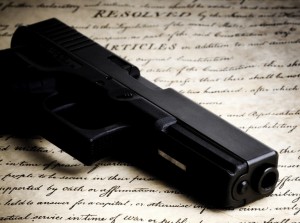 There are several serious constitutional problems in this first sentence. First, there is the separation of powers issue described above. That is, the president is not constitutionally authorized to take “executive actions” that encroach upon rights protected by the Constitution — in this case, the right of the people to keep and bear arms.

Furthermore, the Second Amendment could not be clearer as to the limit on the power of any branch or agency of the federal government when it comes to reducing the scope of that most fundamental right. The Second Amendment reads in relevant part: “the right of the people to keep and bear arms, shall not be infringed.”

On January 20, 2009 and again on January 21, 2013, Barack Hussein Obama swore an oath to God that he would do the very thing he almost never does — adhere to the Constitution.

This situation regarding this latest despotic decree is worse than he would make it appear. For example, he purports in this “Fact Sheet” to be taking aim at the obtaining of guns by the mentally ill:

Too many Americans have been severely injured or lost their lives as a result of gun violence. While the vast majority of Americans who experience a mental illness are not violent, in some cases when persons with a mental illness do not receive the treatment they need, the result can be tragedies such as homicide or suicide.

Remarkably, even for one as adept at double-speak as President Obama, the attempt to deprive the “mentally ill” of their rights is wrapped in the comforting blankets regularly handed out by the nanny state.

President Obama not only assumes the right to determine who is and is not “mentally ill,” but he simultaneously robs those very people of their independence, placing them involuntarily under the protection of the government that robbed them of their rights to begin with.

The most egregious violation of the Constitution comes in a single sentence appearing a few paragraphs down in the “Fact Sheet.” The president declares,

At the same time, the Administration is committed to making sure that anyone who may pose a danger to themselves or others does not have access to a gun.

With this innocently named ‘fact sheet' the President has effectively quashed arguably one of the most important provisions in the Bill of Rights. I hope he is not surprised by the outrage.