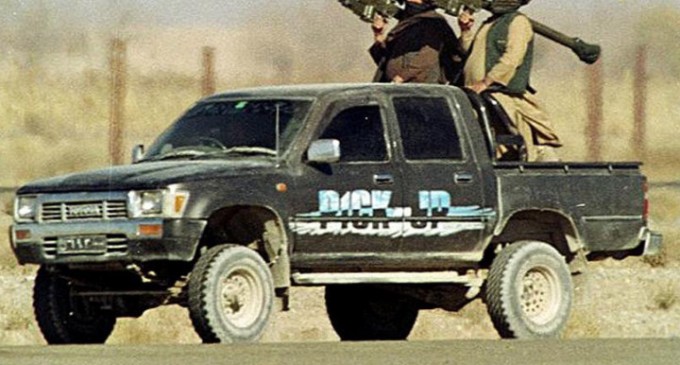 Obama hasn't only returned to the Taliban its top commanders, he's also armed them with modern US Stinger missiles – which they have used to take down US helicopters.

These missiles made their way into the hands of the Taliban through Qatar, who accepted the 5 terrorist commanders Obama just released in exchange for Army Sergeant Bowe Bergdahl.

Miliary records and sources reveal that on July 25, 2012, Taliban fighters in Kunar province successfully targeted a US Army CH-47 helicopter with a new generation Stinger missile.

They thought they had a surefire kill. But instead of bursting into flames, the Chinook just disappeared into the darkness as the American pilot recovered control of the aircraft and brought it to the ground in a hard landing.

The next day, an explosive ordnance disposal team arrived to pick through the wreckage and found unexploded pieces of a missile casing that could only belong to a Stinger missile.

The investigation took time. Arms were twisted, noses put out of joint. But when the results came back, they were stunning: The Stinger tracked back to a lot that had been signed out by the CIA recently, not during the anti-Soviet ­jihad.Lodged in the right nacelle, they found one fragment that contained an entire serial number.

My sources in the US Special Operations community believe the Stinger fired against the Chinook was part of the same lot the CIA turned over to the ­Qataris in early 2011, weapons Hillary Rodham Clinton’s State Department intended for anti-Khadafy forces in Libya.

They believe the Qataris delivered between 50 and 60 of those same Stingers to the Taliban in early 2012, and an additional 200 SA-24 Igla-S surface-to-air missiles.

Qatar now is expected to hold five Taliban commanders released from Guantanamo for a year before allowing them to go to Afghanistan.