Instead of our troops finding ´weapons of mass destruction´as Bush promised, they found remnants of long abandoned programs for chemical weapons that we supplied them. These weapons were discovered underground when we would accidentally bomb a site were they were buried.

These troops would then suffer from being exposed to these weapons.

Now the problem is most of these weapons are buried under parts of Iraq now controlled by ISIS. These weapons still require an expertise to be useful, but with the kind of money ISIS has, one would assume that expertise could be found and utilized.

The American government withheld word about its discoveries even from troops it sent into harm’s way and from military doctors. The government’s secrecy, victims and participants said, prevented troops in some of the war’s most dangerous jobs from receiving proper medical care and official recognition of their wounds.

Eric J. Duling at his home in Niceville, Fla. The cache that contaminated his explosive ordnance disposal team in 2008 was not the first discovery of chemical weapons in the war.

“I felt more like a guinea pig than a wounded soldier,” said a former Army sergeant who suffered mustard burns in 2007 and was denied hospital treatment and medical evacuation to the United States despite requests from his commander.

Congress, too, was only partly informed, while troops and officers were instructed to be silent or give deceptive accounts of what they had found. “ 'Nothing of significance’ is what I was ordered to say,” said Jarrod Lampier, a recently retired Army major who was present for the largest chemical weapons discovery of the war: more than 2,400 nerve-agent rockets unearthed in 2006 at a former Republican Guard compound.

Jarrod L. Taylor, a former Army sergeant on hand for the destruction of mustard shells that burned two soldiers in his infantry company, joked of “wounds that never happened” from “that stuff that didn’t exist.” The public, he said, was misled for a decade. “I love it when I hear, ‘Oh there weren’t any chemical weapons in Iraq,’ ” he said. “There were plenty.”

Between 2004 and 2011, American forces in Iraq encountered thousands ofchemical munitions. In several cases, troops were exposed to chemical agents. 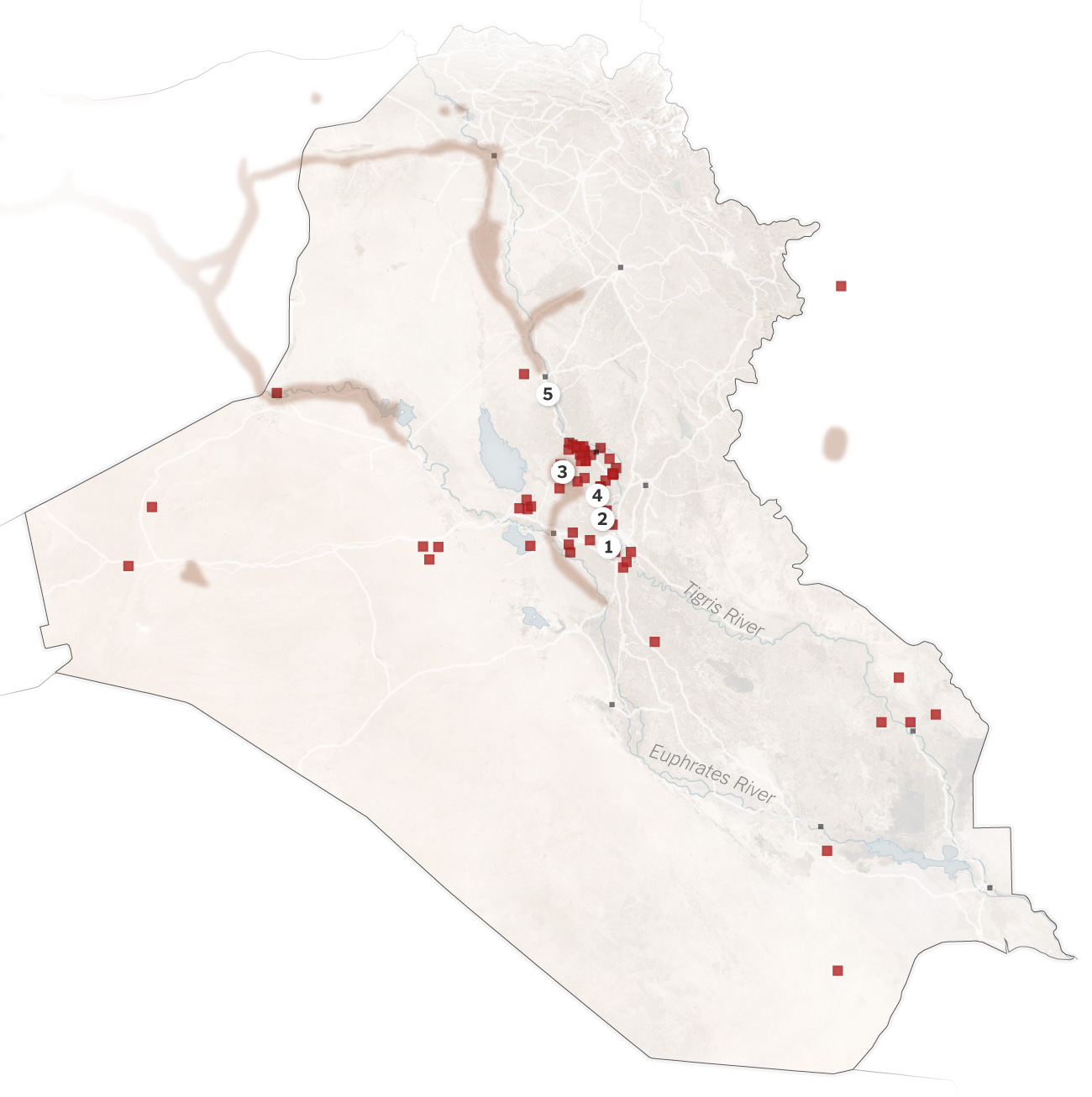 SOME EXPOSURES DETAILED IN THIS ARTICLE1 MAY 2004 Two soldiers exposed to sarin from a shell near Baghdad’s Yarmouk neighborhood.2 SUMMER 2006 Over 2,400 nerve-agent rockets found at this former Republican Guard compound.3 JULY 2008 Six Marines exposed to mustard agent from an artillery shell at an abandoned bunker.4 AUGUST 2008 Five American soldiers exposed to mustard agent while destroying a weapons cache.5 2010 OR EARLY 2011 Hundreds of mustard rounds discovered in a container at this Iraqi security compound.

Rear Adm. John Kirby, spokesman for Defense Secretary Chuck Hagel, declined to address specific incidents detailed in the Times investigation, or to discuss the medical care and denial of medals for troops who were exposed. But he said that the military’s health care system and awards practices were under review, and that Mr. Hagel expected the services to address any shortcomings.

“The secretary believes all service members deserve the best medical and administrative support possible,” he said. “He is, of course, concerned by any indication or allegation they have not received such support. His expectation is that leaders at all levels will strive to correct errors made, when and where they are made.”

The discoveries of these chemical weapons did not support the government’s invasion rationale.

After the terrorist attacks of Sept. 11, 2001, Mr. Bush insisted that Mr. Hussein was hiding an active weapons of mass destruction program, in defiance of international will and at the world’s risk. United Nations inspectors said they could not find evidence for these claims.

Then, during the long occupation, American troops began encountering old chemical munitions in hidden caches and roadside bombs. Typically 155-millimeter artillery shells or 122-millimeter rockets, they were remnants of an arms program Iraq had rushed into production in the 1980s during the Iran-Iraq war.

All had been manufactured before 1991, participants said. Filthy, rusty or corroded, a large fraction of them could not be readily identified as chemical weapons at all. Some were empty, though many of them still contained potent mustard agent or residual sarin. Most could not have been used as designed, and when they ruptured dispersed the chemical agents over a limited area, according to those who collected the majority of them.

In case after case, participants said, analysis of these warheads and shells reaffirmed intelligence failures. First, the American government did not find what it had been looking for at the war’s outset, then it failed to prepare its troops and medical corps for the aged weapons it did find.

As Iraq has been shaken anew by violence, and past security gains have collapsed amid Sunni-Shiite bloodletting and the rise of the Islamic State, this long-hidden chronicle illuminates the persistent risks of the country’s abandoned chemical weapons.

Many chemical weapons incidents clustered around the ruins of theMuthanna State Establishment, the center of Iraqi chemical agent production in the 1980s.

Since June, the compound has been held by the Islamic State, the world’s most radical and violent jihadist group. In a letter sent to the United Nations this summer, the Iraqi government said that about 2,500 corroded chemical rockets remained on the grounds, and that Iraqi officials had witnessed intruders looting equipment before militants shut down the surveillance cameras.

The United States government says the abandoned weapons no longer pose a threat. But nearly a decade of wartime experience showed that old Iraqi chemical munitions often remained dangerous when repurposed for local attacks in makeshift bombs, as insurgents did starting by 2004.

Participants in the chemical weapons discoveries said the United States suppressed knowledge of finds for multiple reasons, including that the government bristled at further acknowledgment it had been wrong. “They needed something to say that after Sept. 11 Saddam used chemical rounds,” Mr. Lampier said. “And all of this was from the pre-1991 era.”

Others pointed to another embarrassment. In five of six incidents in which troops were wounded by chemical agents, the munitions appeared to have been designed in the United States, manufactured in Europe and filled in chemical agent production lines built in Iraq by Western companies.