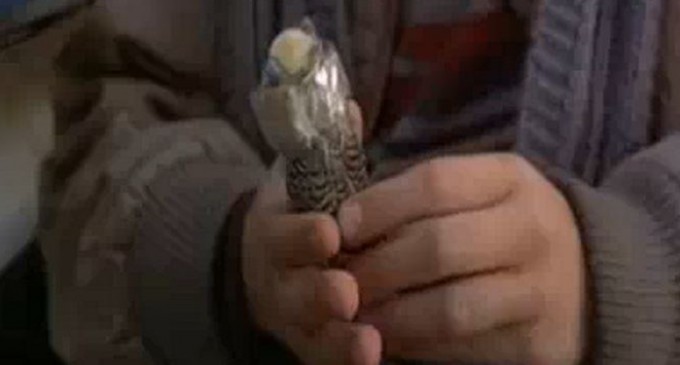 Because Edwin Avellanet had an orange cone in front of his house police questioned him as he was taking out the trash.

Edwin refused to give identification to police and went inside his house.

Police followed him in without a warrant, then beat and pepper sprayed him and his family.

After they knocked over the parakeet's cage, freeing it, they then purposefully killed it!

This is completely sickening! Police brutality in this country is on a dramatic rise!

A Staten Island woman is suing the New York Police Department for allegedly entering her home without a warrant, beating her friends and relatives with clubs and savagely murdering her beloved parakeet.

The incident took place over a year ago, on Labor Day of 2012. A man, Edwin Avellanet, was approached by NYPD as he was taking a bag of garbage outside, according to the New York Daily News. The police wanted to know why there was an orange cone in front of the house. Avellanet said he had put it there to save a parking spot. When the cops asked for his identification, he refused and ran back into the house, which belonged to his mother, Evelyn Lugo.

Police pursued him, broke down the door of Lugo’s house and entered without a warrant. The officers then attacked the other people in the house, according to Lugo’s lawsuit. Several members of the family were pepper sprayed and beaten with clubs, causing bruises, welts and other injuries.

But the cruelest and most senseless act of violence was reserved for Lugo’s pet parakeet, Tito. Officers overturned Tito’s cage, knocking the pretty green bird out into the apartment. Lugo’s daughter, Anna Febles, begged the police to be careful with Tito. Instead, they smashed him.

Lugo’s children were initially afraid to tell their mother than her bird was dead. They worried she would have a hysterical fit, having loved Tito so much.

“I was hurt on the inside, in my heart,” said Lugo, reacting to the death of her bird and the injuries to her children, grandchildren and friends.

Criminal charges against various members of the family were eventually dropped.

The police department had not yet received Lugo’s suit, but the New York Daily News claimed that Lugo is seeking unspecified damages. The police engaged in unlawful search and seizure, excessive force and malicious prosecution, according to the suit.