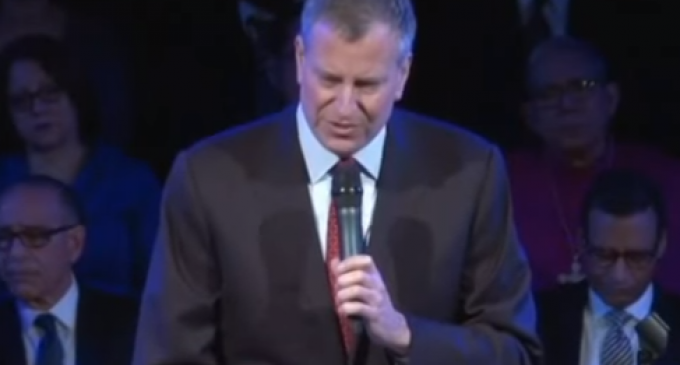 Mayor Rudolph Giuliani never had a problem in dealing with the New York City's Finest.  In fact, it was quite evident throughout his career as a prosecutor, attorney general, and mayor of NYC that he had both the love and admiration of the entire civil force.  His unprecedented actions pre-9/11 to streamline the NYC police precinct network has been hailed as the single most significant event that saved thousands of New Yorkers.  Then, of course, there's his sterling and noble behavior, a picture of amazing calm in the face of overwhelmingly unbearable events on 9/11 that were instrumental in maintaining a national calm for one of the worst catastrophes this nation had ever known.

Mayor Bill DeBlasio has a different way of looking at the police force, however.  Just three years ago, long before Trump was even on the political radar, the activist mayor had a little aside with President Barack Hussein Obama while visiting the White House regarding the recent rash of clashes between police and Black perpetrators.  DeBlasio is in an interracial marriage; therefore his son is of mixed race as well, just like DeBlasio's hero.  So, they hit it off on this subject apparently.

So I've had to worry over the years. Chirlane's had to worry. Is Dante safe each night? There are so many families in this city who feel that each and every night. Is my child safe? And not just from some of the painful realities—crime and violence in some of our neighborhoods—but is safe from the very people they want to have faith in as their protectors.

This was enough of a blow to police officers in NYC, but then he added:

It conforms to something bigger that you've heard come out in the protests in Ferguson and all over the country. This is now a national moment of grief, a national moment of pain and searching for a solution. And you've heard in so many places, people of all backgrounds utter the same basic phrase. They've said “Black lives matter.” And they said it because it had to be said. It's a phrase that should never have to be said. It should be self-evident. But our history, sadly, requires us to say that black lives matter.

This led to a string of events that caused a permanent rift between the mayor and his police force.  Read on further about the latest in a series of verbal clashes between Mayor DeBlasio and the very people charged with the protection of the people of his city and his outrageous reaction in stating that the police “embarrassed themselves.”