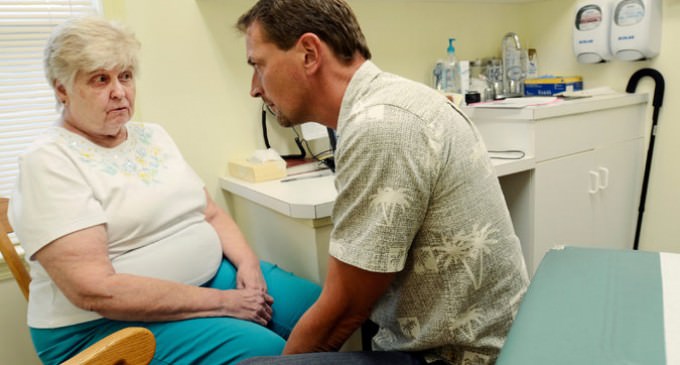 Years after Sarah Palin was mocked, and even received a Lie Of The Year award from Politifact, for suggesting that Obamacare contained ‘death panels', the New York Times has reported that as early as next year Medicare will indeed reimburse doctors for end-of-life consultations.

Critics state that this will end up encouraging sick patients to reject costly treatments that would prolong their life. Of course, doctors will be on the government payroll, who will want to cut healthcare costs…if not for any reason than to line their pockets with more money, like we've seen at the VA.

End-of-life care represents around 22% of all of medical spending in the US. A former Obama adviser, Steve Rattner, has openly stated that we ‘need death panels' to curb healthcare costs for everyone.

DUNDEE, N.Y. — Five years after it exploded into a political conflagration over “death panels,” the issue of paying doctors to talk to patients about end-of-life care is making a comeback, and such sessions may be covered for the 50 million Americans on Medicare as early as next year.

Bypassing the political process, private insurers have begun reimbursing doctors for these “advance care planning” conversations as interest in them rises along with the number of aging Americans. People are living longer with illnesses, and many want more input into how they will spend their final days, including whether they want to die at home or in the hospital, and whether they want full-fledged life-sustaining treatment, just pain relief or something in between. Some states, including Colorado and Oregon, recently began covering the sessions for Medicaid patients.

But far more significant, Medicare may begin covering end-of-life discussions next year if it approves a recent request from the American Medical Association, the country’s largest association of physicians and medical students. One of the A.M.A.’s roles is to create billing codes for medical services, codes used by doctors, hospitals and insurers. It recently created codes for end-of-life conversations and submitted them to Medicare.

The Centers for Medicare and Medicaid Services, which runs Medicare, would not discuss whether it will agree to cover end-of-life discussions; its decision is expected this fall. But the agency often adopts A.M.A. recommendations, which are developed in meetings attended by its representatives. And the political environment is less toxic than it was when the “death panel” label was coined; although there are still opponents, there are more proponents, including Republican politicians.

If Medicare adopts the change, its decision will also set the standard for private insurers, encouraging many more doctors to engage in these conversations.

“We think it’s really important to incentivize this kind of care,” said Dr. Barbara Levy, chairwoman of the A.M.A. committee that submits reimbursement recommendations to Medicare. “The idea is to make sure patients and their families understand the consequences, the pros and cons and options so they can make the best decision for them.”

Now, some doctors conduct such conversations for free or shoehorn them into other medical visits. Dr. Joseph Hinterberger, a family physician here in Dundee, wants to avoid situations in which he has had to decide for incapacitated patients who had no family or stated preferences.

Recently, he spent an unreimbursed hour with Mary Pat Pennell, a retired community college dean, walking through advance directive forms. Ms. Pennell, 80, who sold her blueberry farm and lives with a roommate and four cats, quickly said she would not want to be resuscitated if her heart or lungs stopped. But she took longer to weigh options if she was breathing but otherwise unresponsive.

With reimbursement, “I’d do one of these a day,” said Dr. Hinterberger, whose 3,000 patients in the Finger Lakes region range from college professors to Mennonite farmers who tie horse-and-buggies to his parking lot’s hitching post.

If Medicare covers end-of-life counseling, that could profoundly affect the American way of dying, experts said. But the impact would depend on how much doctors were paid, the allowed frequency of conversations, whether psychologists or other nonphysicians could conduct them, and whether the conversations must be in person or could include phone calls with long-distance family members. Paying for only one session and completion of advance directives would have limited value, experts said.

“This notion that somehow a single conversation and the completion of a document is really an important intervention to the outcome of care is, I think, a legal illusion,” said Dr. Diane E. Meier, director of the Center to Advance Palliative Care. “It has to be a series of recurring conversations over years.”

End-of-life planning remains controversial. After Sarah Palin’s “death panel” label killed efforts to include it in the Affordable Care Act in 2009, Medicareadded it to a 2010 regulation, allowing the federal program to cover “voluntary advance care planning” in annual wellness visits. But bowing to political pressure, the Obama administration had Medicare rescind that portion of the regulation. In doing so, Medicare wrote that it had not considered the viewpoints of members of Congress and others who opposed it.