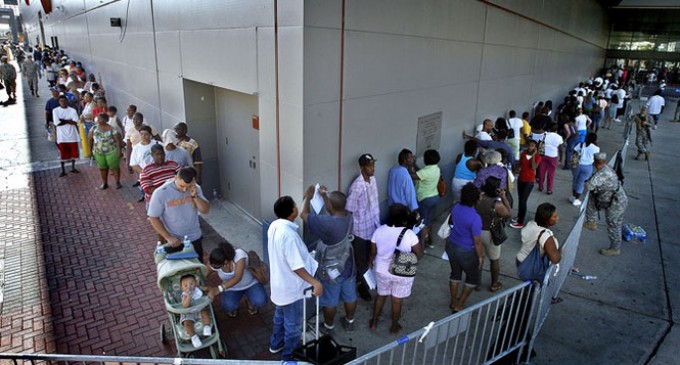 If you want a crystal clear indicator of how President Obama has taken America down the road of dependence, look no further than the record high level of people on food stamps.

Now of course, liberals don't want you to look at that number: they'd much rather you and everyone else pour over the unemployment rate, which has reached it's lowest point in 8 years. What they don't tell you though is that the government doesn't take into account people who aren't even members of the workforce when it tallies that number up.

So how are all these able-bodied, unemployed people getting by? You guessed it – food stamps, which peaked at 47, 636,000 in 2013 and remain close to that estimate.

Examining the issue further, the Supplemental Nutrition Assistance Program reports that the number of people on benefits has been around 46 million since 2011. More specifically, it has been calculated that there are currently 45.8 Americans who get food stamps.

But this unprecedented surge in food stamp dependence didn't just happen in a vacuum: it was the result of a policy deliberately implemented by this administration. Indeed, when one looks at the available data, one can see the number of food stamp recipients skyrocketed after Obama took office:

Several reasons explain the high numbers. Governments have made it easier to sign up for the program. More than 85 percent of eligible food-stamp recipients took assistance in 2013, the most recent year of available data, compared to 70 percent in 2008. The higher sign-up rate among those qualified accounts for 8.6 million more people on food stamps — about half of the program’s total increase.

Well, at least President Obama put forth one program that has been easy to sign up for.

We now have a country based on government dependence. Heritage Foundation research fellow Robert Rector said, “Clearly there’s a group of people who are not in the labor force, and 10 years ago they would have been. Now they’re relying on food stamps.”

When we have a government full of enablers telling people that they don’t have to work to provide for themselves and their families, they create an atmosphere of dependence and reliance.