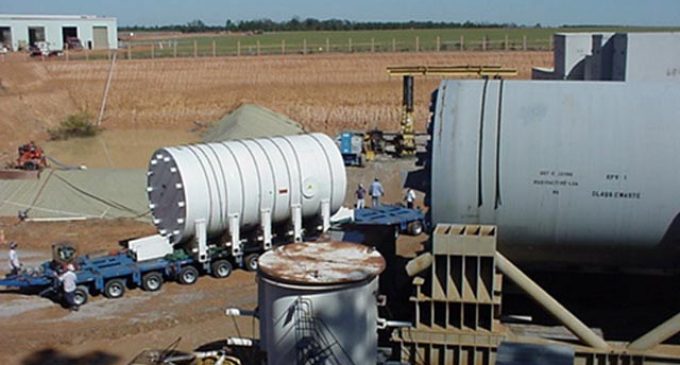 West coast cities are not the only ones seeing radiation  increase near their water. The South Carolina Department of Health and Environmental Control confirmed a leak from a nuclear power plant has affected drinking water for communities near the Barnwell Nuclear site.

It has been reported that a radioactive plume is leaking from a site in South Carolina.
The Barnell Nuclear site occupies about 235 acres of land originally owned by Chem-Nuclear Systems (CNS). Disposal of waste began at the facility in 1971 and Chem-Nuclear Systems (CNS), currently owned by Energy Solutions, has been the sole operator since that time.
According to WLTX, the plume is moving off the Barnwell Nuclear site southwest toward the Savannah River Site.  Traces of Tritium have also been found in Mary’s Branch Creek.

“DHEC has documented there is a plume leaking from the site but the problem with Tritium is it’s hard to remediate, it’s hard to clean it up,” said Tom Clements, Southeast Nuclear Campaign Coordinator for Friends of the Earth.  “So we have to look at ways to stop it from leaking from the dump.”
The site receives toxic waste from South Carolina, New Jersey, and Connecticut and have enough land to stay open through 2038.
“The problem is in their annual updates, there’s no plan to address the leaks,” Clements said.  “We need to make sure the facility is capped off in a better way and better managed so there is less nuclear material leaking.”
“It combines with oxygen to form basically radioactive water.  So, it gets everywhere in the environment,” Clements said.  “The level was far above the drinking water standard but fortunately it doesn’t look like anyone is drinking the water.”