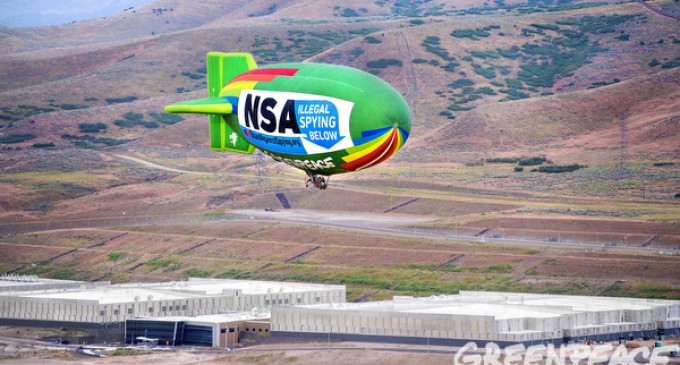 “NSA, Illegal Spying Below” was the writing on a ‘protest blimp’ which flew over the NSA’s massive data center in Utah yesterday.

The EFF, Greenpeace and the Tenth Amendment Center were behind the creative effort to encourage states to cut off water and power to the NSA’s data centers, which would effectively kill the agency’s operation, by utilizing a blimp to draw attention to the illegal activities of the NSA.

he EFF, Greenpeace and the Tenth Amendment Center used the green blimp, which had the words “NSA, Illegal Spying Below” with an arrow pointing down.

“NSA surveillance impacts a lot of us, but it’s hard to feel the physical impact of it,” said Higgins. “When you see the sprawling, scary data center, it really drives home that this agency is really doing something physical and real that affects Americans and non-Americans’ lives.”

The FAA and the Utah National Guard told FOX 13 the flight over the Utah Data Center was legal.

The protest groups said they took steps to make sure their flyover was legal, even bringing the blimp down by 7 a.m. to ensure it did not interfere with other air traffic.

The NSA did not immediately return a request for comment on the demonstration.

The action is part of a larger campaign the groups have to increase pressure on the NSA over domestic surveillance. Privacy rights groups have called for power and water to be cut off to the Utah Data Center.

In May, FOX 13 published the Utah Data Center’s water bill, which suggested the facility may not be fully operational.

Some Utah lawmakers have also renewed plans for legislation to cut off material support for the NSA data center.