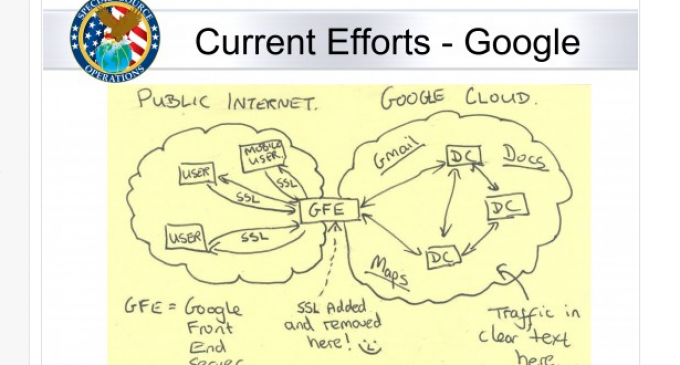 The NSA has been literally hacking into Google and Yahoo and collecting user information.

If you did this, you’d go to jail for a very long time! Of course, the NSA feels it’s above the law and IS the law.

Total surveillance is the goal.

Dissidents are the target, which should be EVERYONE who cares about freedom!

The National Security Agency has secretly broken into the main communications links that connect Yahoo and Google data centers around the world, according to documents obtained from former NSA contractor Edward Snowden and interviews with knowledgeable officials.

By tapping those links, the agency has positioned itself to collect at will from hundreds of millions of user accounts, many of them belonging to Americans. The NSA does not keep everything it collects, but it keeps a lot.

According to a top-secret accounting dated Jan. 9, 2013, NSA’s acquisitions directorate sends millions of records every day from Yahoo and Google internal networks to data warehouses at the agency’s Fort Meade headquarters. In the preceding 30 days, the report said, field collectors had processed and sent back 181,280,466 new records — including “metadata,” which would indicate who sent or received e-mails and when, as well as content such as text, audio and video.

The NSA’s principal tool to exploit the data links is a project called MUSCULAR, operated jointly with the agency’s British counterpart, the Government Communications Headquarters . From undisclosed interception points, the NSA and the GCHQ are copying entire data flows across fiber-optic cables that carry information between the data centers of the Silicon Valley giants.

The infiltration is especially striking because the NSA, under a separate program known as PRISM, has front-door access to Google and Yahoo user accounts through a court-approved process.

In a statement, Google’s chief legal officer, David Drummond, said the company has “long been concerned about the possibility of this kind of snooping” and has not provided the government with access to its systems.

“We are outraged at the lengths to which the government seems to have gone to intercept data from our private fiber networks, and it underscores the need for urgent reform,” he said.

At Yahoo, a spokeswoman said, “We have strict controls in place to protect the security of our data centers, and we have not given access to our data centers to the NSA or to any other government agency.”