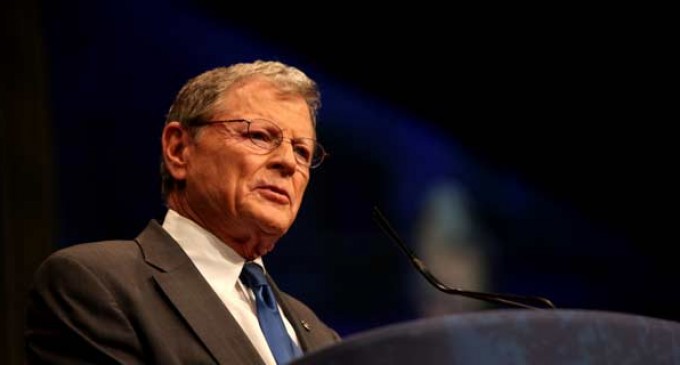 On Sunday Oklahoma Senator Jim Inhofe (R-Okla.) criticized what he called “Phony conservatives” for making the recent NSA scandals into an issue. He does admit the security agency is breaking the law in some cases, but suggests that is somehow acceptable in case it stops terror.

What do you think? Let us know in the comments below if you think it’s OK for Obama’s NSA to illegally trample the rights of U.S. citizens to ‘get the job done’.

“There are a lot of conservatives, and some of them are phony, quite frankly, trying to use this as an issue, saying we are going to do away with the NSA and all that,” Inhofe said on Aaron Klein’s radio show on WABC in an interview that will air on Sunday night. “Well, since I am the ranking member of the Armed Services Committee I have to look at this very seriously to see what function the NSA is performing.”

Despite excoriating other conservatives for inflating the threat posed by the agency, Inhofe still called for greater checks on the NSA’s power, accusing the Obama administration of having allowed the agency to break the law.

“So we have to have that capability [to stop terrorism], but we have to make sure that the NSA people in this Obama administration are not in a position where they can just merely say, ‘Well we cannot do that because we will break a law,’ since we know that wont make any difference to them,” Inhofe said. “So we are now faced with a situation where we know if you set up something where legally the NSA has to follow the guidelines, has to comply with the law, that doesn’t work. Because those guys are breaking the law.”