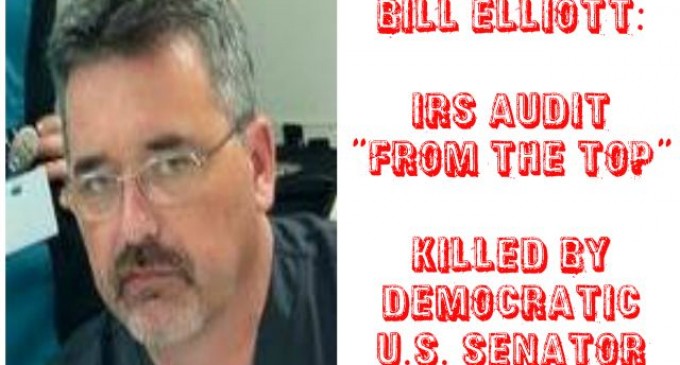 A Senator from North Carolina has confirmed that the IRS targeting of specific groups and individuals ‘comes from the top”.

The Congressman helped Bill Elliott, the cancer patient whose insurance was cancelled then reinstated, and who received a notification of an IRS audit on the same day.

Apparently, Mr. Elliott was targeted for audit by the IRS, but the audit was canceled with help of his state's Congressman, who told him he the audit ‘came from the top'.

Do we really need any more confirmation that the White House has used the IRS like it's personal police force?

WASHINGTON, December 11, 2013 — Bill Elliott, the cancer patient whose insurance was cancelled then reinstated, received a notification of an IRS audit on the same day as the man who helped him get his insurance back. Elliott now confirms that the IRS inquiry came “from the top,” and that a Democratic Senator from North Carolina has shut down the audit.

In an interview Wednesday on HeartlandTalkRadio, Elliott explained that he got cancer in 2007 when he was exposed to some radiological contamination in his work as a chemical and biological trainer to the military. He received a settlement from the government in 2009, which is the same year that the IRS wanted to audit. However, Elliott explains that settlements like these are tax-exempt, and that the IRS was inquiring about something to which they already should have known the answer.

Earlier this week, Elliott learned that the IRS would no longer be auditing him. He said that a U.S. Senator helped him, so it was speculated that Sen. Tim Scott or Lindsay Graham, both Republicans from Elliott’s home state of South Carolina, assisted him. To the contrary, “the Senator is a Democrat from North Carolina,” Elliott mentioned in the interview.

Furthermore, Elliott is confident he was targeted by the IRS. “I was told by the Congressman here that this audit ‘came from the top.’” Elliott explained that he wasn’t sure whether he meant that “the top” was the president, the IRS or HHS. Someone “from the top ordered the investigation of me and Steve [Tucker],” he says. Elliott has been in communication with Governor Nikki Haley and other elected officials to obtain information and assistance.

Elliott expects to receive a confirmation soon that the IRS audit is “over with” and that he is “clean and good to go.” He plans to continue to help others who have experienced what he has, including informing others that they too can have their insurance reinstated through HIPAA laws.