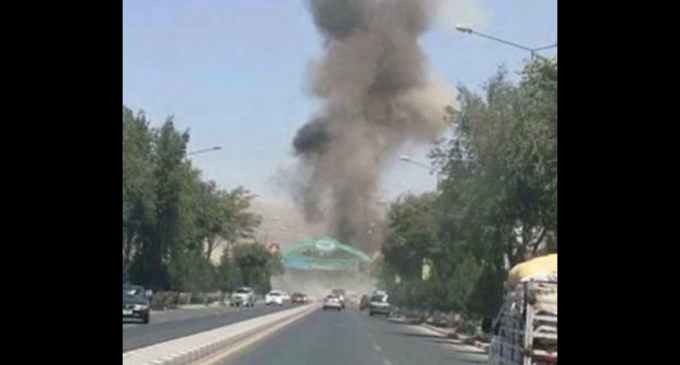 In what is truly a nightmare scenario, an explosion has hit the Kabul airport killing at least three people and injuring 3 Marines. It is presumed that a suicide bomber is responsible.

Update (1040ET): According to Politico, ISIS is responsible for the blast outside the Kabul airport.

The attack occurred just outside Abbey gate, where U.S. personnel until recently welcomed American citizens to board evacuation flights, according to four sources with knowledge of the situation.

An ISIS suicide bomber was responsible for the explosion outside the Kabul airport, per a U.S. official and a source.

This comes just hours after officials began warning about an increased ISIS threat in Afghanistan. https://t.co/WcwyOqOQLL

According to reports from Reuters, there have been at least three casualties in the explosion which appears to have happened near Baron Hotel across from Kabul airport (the hotel is largely by Brits). WSJ reporter Dion Nussenbaum adds that Marines have been injured but details remain scant.

And here is ABC News' Martha Raddatz with the painfully obvious:

And the moment of the explosion:

Update (0945ET): It appears, for once, the intelligence agencies were right (or Taliban warnings that is). The Pentagon has just confirmed…

…that there has been a large explosion at Abbey Gate at the Kabul Airport.

Local reports also note gunfire is being heard around the airport. Some purported images of the aftermath have been shown on social media (not confirmed)…

U.S. official tells Reuters that initial report is that the explosion outside Kabul airport was caused by a suicide bombing.

Who could have seen this coming?

Of course, we assume President Biden has a ‘contingency plan' for this.

Update (0745ET): A spokesman for the Taliban has just revealed to the Russian press that the Taliban warned the west about the supposedly “imminent” ISIS threat lurking outside the Kabul airport.

Here's more from RT, the outlet that broke the story.

Zabihullah Mujahid, who holds the office of Information Minister in the Taliban-installed government in Afghanistan, told the Russian media that his organization was the source of the information. The threat was not specific, he said in an interview, but the plan was to provoke chaos and violence at the airport and hurt the Taliban’s reputation.

“Over the last 20 years we have learned things and changed,” the official said in the interview. “We want to prove that we are not what anti-Taliban propaganda has portrayed us to be. We want to show that to the world.”

So, we're just taking the Taliban at their word now? Sounds reasonable enough…

Once again, the US, UK and France are warning that ISIS might carry out an attack – perhaps a suicide bombing – at the Kabul airport to target crowds of departing westerners, and have thus halted evacuations once again on Thursday. This is particularly troubling news for more than 1,000 Americans who have yet to be evacuated, as well as the thousands of Afghans with special immigrant visas who will likely be left behind to face the wrath of the Taliban.

According to the NYT, several European nations announced on Thursday that they planned to halt their evacuations from Kabul airport following reports of the ISIS threat, despite the looming Aug. 31 deadline (which the Taliban have insisted must be met or the west will face “consequences). President Biden has reportedly been briefed on the matter.

Belgium, the Netherlands and Denmark all said they would no longer be able to facilitate airlifts from the Hamid Karzai International Airport, which continues to be surrounded by crowds of thousands of desperate Afghans (and foreigners) struggling to get through. The US embassy warned Americans on Wednesday to “leave immediately,” and stay away from the airport.

The UK and Australia issued similar warnings, with Australians describing an “ongoing and very high threat of terrorist attack”.

The warnings came as the last of the estimated 1.5K Americans and countless other foreigners still in Afghanistan scramble to board the last flights out of the country before the US withdrawal is officially complete on Aug. 31. Thousands of Afghan nationals are camped outside the perimeter of the airport in desperate attempts to escape on the last flights out, some with the special visas allowing them to leave.

Then again, we can't help but wonder: is this “threat” actually credible? Or merely an excuse for Biden & Co. when they inevitably fail to get everybody out in time.

A senior U.S. official, who spoke on the condition of anonymity about confidential assessments, told the NYT that the US is monitoring a “specific” and “credible” ISIS threat. Apparently, ISIS has carried out dozens of attacks in Afghanistan in recent years (and a regional ISIS leader was one of the few prisoners executed by the Taliban following their takeover).

British armed forces minister James Heappey told the BBC radio that intelligence of a suicide bombing by ISIS had become “much firmer” since the weekend.

“I can't stress the desperation of the situation enough. The threat is credible, it is imminent, it is lethal. We wouldn't be saying this if we weren't genuinely concerned about offering Islamic State a target that is just unimaginable,” Heappey said.

But despite the warnings, a Western diplomat in Kabul told Reuters that the areas outside the airport gates remained “incredibly crowded”.

Even the Taliban are reportedly worried about the prospect of an ISIS attack.

“Our guards are also risking their lives at Kabul airport, they face a threat too from the Islamic State group,” said a Taliban official, who spoke on condition of anonymity.

Civil aviation official Ahmedullah Rafiqzai told Reuters that people continued to crowd around the gates despite the attack warnings because “[p]eople don't want to move, it's their determination to leave this country that they are not scared to even die.”

An attack would put the remaining western forces in Afghanistan in a difficult position, since they're not exactly prepared to attack or defend anything, or anyone.

“Western forces, under no circumstances, want to be in a position to launch an offensive or a defensive attack against anyone,” the diplomat added.