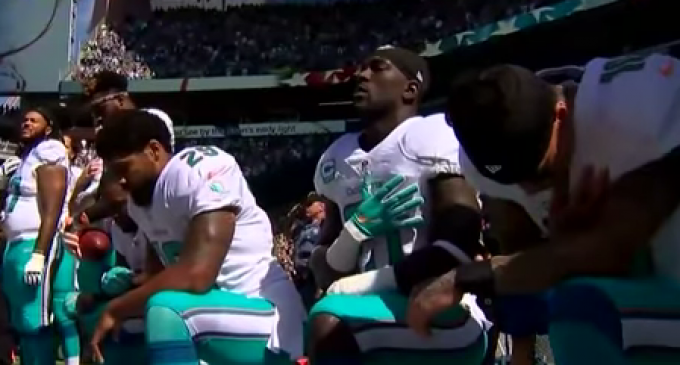 For the third week in a row, ratings for the NFL have fallen due to anti-American protests during the playing of the national anthem. While ESPN praises Kaepernick and his teammates for taking a knee and disrespecting America both on and off the field, the NFL is losing quite a bit of viewers. Why, you might be wondering. Well, if you take into consideration that unlike the MLB and the NHL, the NFL is made up of mostly American players, as are their viewers.

While this week's drop happened to coincide with the first presidential debate between Donald Trump and Hillary Clinton, ratings have been decreasing steadily since the start of the season. According to Sports Business Daily, ratings have dropped by eighteen percent since this point last season. And this is all thanks to Kaepernick and his “protest.” Since he started this movement he probably hoped would keep him relevant, several other players across the league have joined him. It's really rather ironic if you think about it. None of these players live in poverty, and they probably know about as little about American as a three year old child does. And their actions haven't stopped at taking a knee.

Find out what else they're doing on the next page.