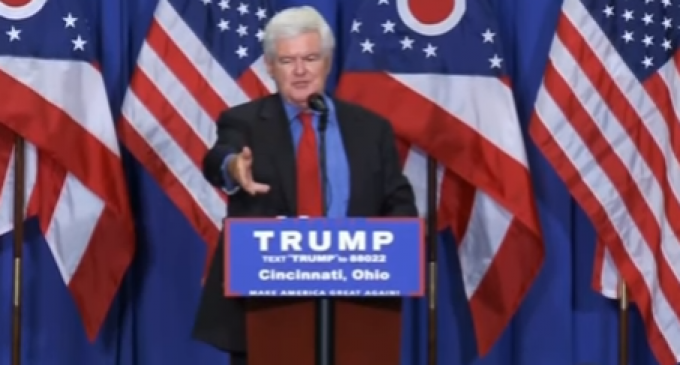 Yet another respected Republican statesman has returned to the limelight to blast Hillary Clinton and praise her rival, Donald Trump.

That statesman is none other than Newt Gingrich, who most notably served as Speaker of the House during the administration of Bill Clinton, whom he often clashed with as the latter tried to force his left-wing agenda on the United States.

Of course, Americans old enough to remember those times will recall that it wasn't just Bill who Gingrich had to contend with: he had to deal with Hillary, who used her influence as First Lady to unsuccessfully push for socialized health care, as well.

Now, once again, Gingrich finds himself at odds with Hillary as she reaches out for the White House. Speaking at a Trump campaign event, the former Speaker criticized the FBI's refusal to pursue charges against her, asking the audience, “Is there a single person here who believes that if you had done what Hillary Clinton had done that you wouldn't be prosecuted?” The audience booed in agreement, but Gingrich already knew the answer to his question: “Not a chance!”

Watch Gingrich's speech for yourself on the next page: