How much do you have to fork out for a doomsday bunker? Believe it or not, it can be downright cheap. Well, comparatively.

“We don't sell fear. We sell preparedness.”
That's the claim American bunker builder Rising S makes on its website, where it advertises “preparedness” as mini-compounds that can feature functioning kitchens, restrooms, solar-powered electricity and surveillance — starting from around $39,500 and running into the millions. 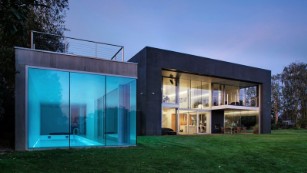 “Everybody wants their own personal touch to it, just like building a house,” said general manager Gary Lynch, adding that the company has sold approximately 1,400 bunkers in its 18-year history. “They're looking for something to protect their families, something that's self sufficient, something that they can live in for a prolonged period of time.”
This year alone, Lynch expects to sell around a dozen bunkers to New Zealand — which would double the firm's total sales ever in the country, which have mainly been to American buyers. Traditionally, the New Zealand market makes up a tiny fraction of his clients, but there was an uptick in interest in 2017 and 2018, he said. “There were a lot of people that were buying land and putting bunkers” below ground,he said.
Lynch says he won't show CNN Businessa bunker because his clients' privacy is paramount. He doesn't want to go into specifics because it brings “scam artists” into the industry, who he says think they can build bunkers for cheaper.

“Before we came along, bunkers were just cold, clammy holes in the ground; dank, dark, moist uncomfortable places nobody wanted to be unless there was a threat of nuclear war,” Lynch said. “We made them more like homes.”

That is, if your home is a 13,000-square-foot residence with a shooting range, bowling alley, movie theatre, gym and greenhouse, like a US$15 million (NZ$25.2) bunker he built for a client in Napa.

About 1000 requests for information have flooded Rising S in recent weeks. Lynch plans to add a second shift to his factory to meet demand. While the billionaire bunkers are the most lucrative, the company also offers more modest underground dwellings, at about US$150,000 (NZ$250,000) for 600 square feet.

Rising S had a run on requests for New Zealand bunkers a few years ago. It's installed a few dozen there, mainly for clients from Silicon Valley, he said.

Billionaire venture capitalist Peter Thiel, co-founder of PayPal and an early Facebook investor, has a 477-acre former sheep station in New Zealand. He's credited for turning the island nation into the tech world's destination for doomsday preppers. An entire Vice documentary, Hunt for the Bunker People, centered on the New Zealand bolthole phenomenon.

“Saying you're ‘buying a house in New Zealand' is kind of a wink, wink, say no more,” allusion to an apocalypse hide-away there, LinkedIn co-founder Reid Hoffman told The New Yorker in 2017.

More than half of his fellow Silicon Valley billionaires have built refuges in case of cataclysmic events, Hoffman told the magazine.

OpenAI CEO Sam Altman, told The New Yorker in 2016 that in the event of a pandemic, he would fly with Thiel to New Zealand. But that's not his only back-up plan.

“I have guns, gold, potassium iodide, antibiotics, water, gas masks … and a big patch of land in Big Sur I can fly to,” he told the magazine.

But in fact, his current reality is similar to everyone else's, with the addition that, according to his website, he's funding projects helping with COVID-19.

“I'm planning to stay in San Francisco, stocked up on food and sheltering in place, and trying to help as much as I can,” he wrote in an email. “I do have a lot of emergency supplies but feel fine here.”

Some developers have turned former military installations into doomsday destinations. One big difference: Sometimes that means the residents will be cohabiting with other preppers, not just their immediate family.

“We took a literal weapon of mass destruction and turned it into a state of the art structure that saves lives,” said developer/owner Larry Hall. “This structure will outlast the great castles of Europe.”

As it name implies, the complex legally consists of condominiums with a homeowners' association, albeit one with unusual requirements. Residents commit to rotating through four-hour days providing essential services such as childcare, tending the garden, doing security, maintenance, pool duty, inventory control. “A psychologist told us this was mandatory,” Hall said. “The worst thing is to have people who don't feel productive.”

Prices are a bargain by Bay Area standards, ranging from US$500,000 (NZ$840,000) for a hotel-sized suite to US$2.4 million (NZ$4.03m) for a full-floor unit. The phone is ringing off the hook there as well, Hall said. Two units are in contract now, including one that a client bought sight unseen last week based on a video tour.

One tech executive that fled to New Zealand at the start of the pandemic called Rising S Company with an urgent request, according to Bloomberg. He had somehow forgotten how to open the secret door to his multimillion-dollar private bunker located 11 feet underground in New Zealand.

The tech executive had neve­r used the bunker and couldn’t remember how to unlock it, according to Gary Lynch, general manager of Rising S Company.

“He wanted to verify the combination for the door and was asking questions about the power and the hot water heater and whether he needed to take extra water or air filters,” Lynch said.

The tech chief runs a company in the San Francisco Bay Area. However, he lives in New York, which was also fast becoming the world’s coronavirus epicenter.

“He went out to New Zealand to escape everything that’s happening,” Lynch added. He, however, did not identify the bunker owner because his client lists private. Although he mentioned that the client was still ‘there’.