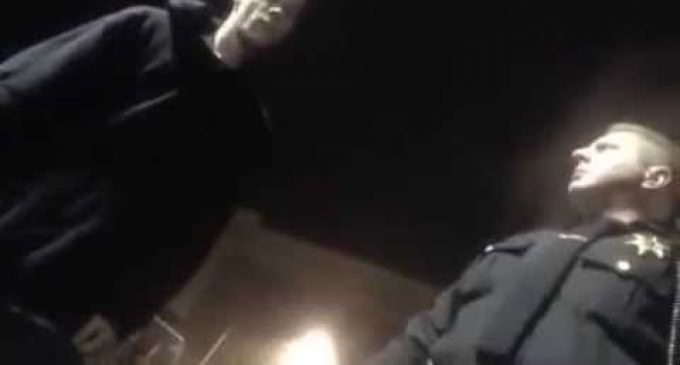 In a case of sheer police brutality, deputy Shawn Glans slapped Colin Fitch simply for refusing to submit to a unwarranted search of his car.

As the police state grows, police are acting more and more like they are our overlords and whoever refuses their commands should be brutalized.

According to Adam Roberts, who spoke with Infowars after uploading the disturbing video to Youtube, he and his friend Colin Fitch were approached by two deputies while shopping inside a Walmart that evening.

After being forced to present their IDs, the pair were taken outside to Colin’s vehicle and asked about a .22 rifle on the backseat.

As Colin explained that he had just purchased the rifle earlier that day at a nearby store, a deputy Shawn Glans began demanding access to the vehicle, despite Colin proving that he was of legal age to own it.

“So they started questioning us and were very ornery and asking about the gun and what not and then Colin asked him what we had done wrong and what he was charging us with and he didn’t give us a good answer,” Roberts said.

Choosing to assert his Fourth Amendment, Colin told Deputy Glans that he would not consent to a search unless a warrant was obtained.

“But he said he wanted to search the car… and my friend Colin asked him what his reason was for and the cop went on about how he just wanted to check, and Colin didn’t really feel like he had a real reason.”

After failing to coerce Colin into opening the vehicle, Deputy Glans became irate, ironically at the constitutional right he swore to uphold.

“Let me see your f*cking keys… I’m searching your f*cking car,” Deputy Glans said, taking Colin’s keys against his will.

Astonishingly, as Colin began to vocally protest the illegal seizure of his car keys, Deputy Glans responded by smashing the back of his head.

Glans continued by unloading a stream of profanities at Colin for daring to defy his unlawful actions.

“I can get a lot more intense,” Deputy Glans told Roberts. “I’ll rip your f*cking head off and sh*t down your neck.”

Roberts says the video has since been shown to Glans’ supervisors, who claim an investigation is underway.