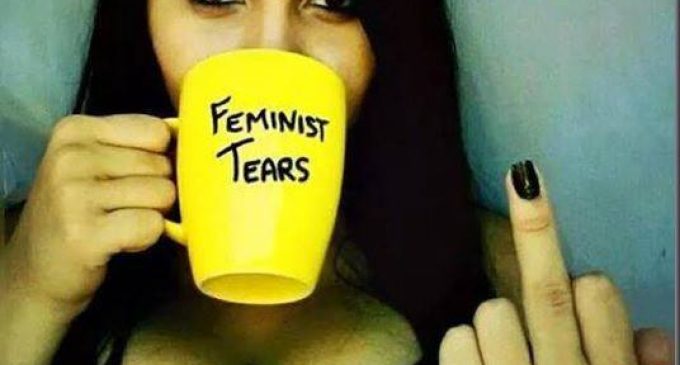 Where are all these feminists donning pink hats in solidarity for the global sisterhood of women? Liberal feminism is an enemy of women. Yes, they also hate men. But that is nothing more than a secondary blame shifting tool used on a whim to mask their deepest rooted source of loathing. That is not misogynistic. It is the truth.

This army of pink hat adorning warriors hates Donald Trump not because he condoned or remained silent on the brutal mutilation of young girls, but because he made it clearly known he was only attracted to in-shape women. You can easily imagine the indignation running through the minds of these liberal feminists. They probably went all out vying for his attention, hiding Cheetos in between their fat rolls trying to naively entice The Donald to come their way for an afternoon delight snack only to find their fat positive dreams crushed with a massive dose of reality too scary for them to wrap their heads around.

Man not personally attracted to fat women = unforgivable offense requiring hundreds of thousands of privileged women to knit pink hats and pour out onto the streets in protest.

Men cutting off over 150,000 young girls clitorises without anesthetics in a country with a smaller population than the state of New Jersey? That’s all good. They’re just scraping off all the genital membranes. Muslims Doctors say little girls enjoy it as it pleases Allah and Daddy. That doesn’t sound like castration to us big empowered liberal feminist. Stop trying to mansplain female genital mutilation all you big bad evil white men. Ya right! Can you believe the sickening hypocrisy?!

A new study shows that 150,00 Swedish girls would beg to differ with liberal feminists when it comes to FGM and the real problems facing Western women.

The religious group behind the Swedish FGM crises, what’s being done by authorities to combat, and how liberal activists are fighting to make this practice a religiously protected right in America on the next page