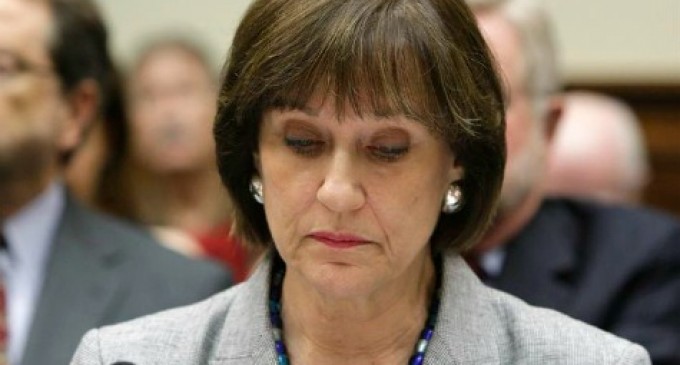 Newly released emails show us how the IRS was preparing to trump up fake criminal charges against Tea Party groups.

Rep. Jim Jordan, R-Ohio, states that if IRS targeting hadn’t been stopped, “Eric Holder’s politicized Justice Department would likely have been leveling trumped up criminal charges against Tea Party groups to intimidate them from exercising their Constitutional rights.”

Of course, this isn’t just Lois Lerner and limited to agents working in the IRS’ Cincinnati field office. Obama stated that there isn’t a ‘not even a smidgen of corruption’ concerning this entire scandal. A ridiculous statement made in the face of obvious criminality. If that’s not the most damning admission of guilt I don’t know what is!

Republicans say newly released emails show that if the IRS’ targeting of Tea Party groups hadn’t been stopped, those organizations could have faced “trumped up criminal charges” — since ex-IRS official Lois Lerner and the Justice Department were apparently coordinating just days before the scandal was exposed.

The emails, obtained by Judicial Watch and first reported by TownHall.com, showed correspondence between Lerner and others at the IRS regarding the Justice Department’s interest in investigating “political” groups. Based on the emails, the IRS seemed to be on board.

House Republicans claimed after the emails were published that they were further proof of coordination among various agencies to target conservatives.

“The release of new documents underscores the political nature of IRS Tea Party targeting and the extent to which supposed apolitical officials took direction from elected Democrats,” House Oversight and Government Reform Committee Chairman Darrell Issa, R-Calif., said in a statement.  “These e-mails are part of an overwhelming body of evidence that political pressure from prominent Democrats led to the targeting of Americans for their political beliefs.”

Rep. Jim Jordan, R-Ohio, said that if the targeting hadn’t been stopped, “Eric Holder’s politicized Justice Department would likely have been leveling trumped up criminal charges against Tea Party groups to intimidate them from exercising their Constitutional rights.”

At the least, the emails were another indication the targeting may have stretched deeper into the Obama administration. Lerner, the director of the agency’s Exempt Organizations division before retiring last year, initially said the targeting was limited to agents working in the IRS’ Cincinnati field office.

However, a series of inspector general and congressional probes since the scandal broke last year appear to show the targeting of mostly conservative-leaning groups seeking tax-exempt status was orchestrated in Washington.

In a May 2013 email, Lerner responded to a Justice Department inquiry about whether tax-exempt groups could be criminally prosecuted for lying about political activity.

“I got a call today from Richard Pilger Director Elections Crimes Branch at DOJ,” Lerner reportedly wrote to the office of Steven Miller, the agency’s acting director at the time. “He wanted to know who at IRS the DOJ folk s [sic] could talk to about Sen. Whitehouse idea at the hearing that DOJ could piece together false statement cases about applicants who ‘lied’ on their 1024s — saying they weren’t planning on doing political activity, and then turning around and making large visible political expenditures.

“DOJ is feeling like it needs to respond, but want to talk to the right folks at IRS to see whether there are impediments from our side and what, if any damage this might do to IRS programs. I told him that sounded like we might need several folks from IRS.”

Nikole C. Flax, Miller’s chief of staff, responded: “I think we should do it — also need to include CI [Criminal Investigation Division], which we can help coordinate. Also, we need to reach out to FEC. Does it make sense to consider including them in this or keep it separate?”