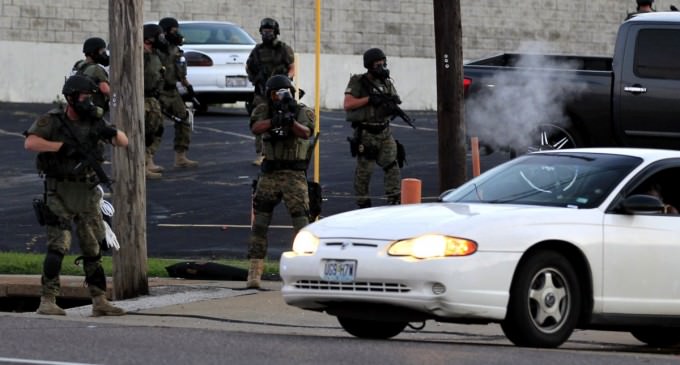 When residents took to the streets to protest the recent killing of unarmed 18-year-old Michael Brown by local police in the small town of Ferguson, Missouri, we get a clear look at today's law enforcement – not exactly persons you would feel comfortable calling should you need to be protected or served.

Instead of showing up to help serve citizens exercising their rights to protest against an injustice, these law enforcement officers show up in full military gear, flaunting an ‘us vs them'  mentality.

This is the new USA.

“Why do these cops need MARPAT camo pants again,” I asked on Twitter this morning. One of the most interesting responses came from a follower who says he served in the Army's 82nd Airborne Division: “We rolled lighter than that in an actual warzone,” writes Paul Szoldra from Business Insider, who wrote an penned an article questioning the recent change in our law enforcement.

There can be no doubt that American citizens are the new ‘insurgents'. The state is obviously preparing for a coming event. Are you aware of this? Are you prepared?

We looked intimidating, but all of our vehicles and equipment had a clear purpose for combat against enemy forces. So why is this same gear being used on our city streets?

On Saturday, a police officer in Ferguson, Missouri, shot and killed 18-year-old Michael Brown, an unarmed black man. In the days that have followed, the town with a population of about 21,000 has seen massive protests in response to the shooting, as some witnesses said Brown had his hands up when he was killed.

Putting aside what started the protests for a moment, it's worth discussing the police response to the outrage. In photos taken Monday, we are shown a heavily armed SWAT team.

They have short-barreled 5.56-mm rifles based on the military M4 carbine, with scopes that can accurately hit a target out to 500 meters. On their side they carry pistols. On their front, over their body armor, they carry at least four to six extra magazines, loaded with 30 rounds each. Their uniform would be mistaken for a soldier's if it weren't for their “Police” patches. They wear green tops, and pants fashioned after the U.S. Marine Corps MARPAT camouflage pattern. And they stand in front of a massive uparmored truck called a Bearcat, similar in look to a mine-resistant ambush protected vehicle, or as the troops who rode in them call it, the MRAP.

When did this become OK? When did “protect and serve” turn into “us versus them”?

“Why do these cops need MARPAT camo pants again,” I asked on Twitter this morning. One of the most interesting responses came from a follower who says he served in the Army's 82nd Airborne Division: “We rolled lighter than that in an actual warzone.” The police point their weapons at a car as it pulls away after tear gas was used by authorities Monday in Ferguson, Missouri.

Let's be clear: This is not a war zone — even if the FAA banned flights under 3,000 feet. This is a city outside of St. Louis where people on both sides are angry. Protesters have looted and torched a gas station, and shots were fired at police, according to The Washington Post.

The scene is tense, but the presence of what looks like a military force doesn't seem to be helping.

“Bring it. You fucking animals, bring it,” one police officer was caught on video telling protesters. In Ferguson and beyond, it seems that some police officers have shed the blue uniform and have put on the uniform and gear of the military, bringing the attitude along with it.

Matt Ford, the social-media editor at The Atlantic, summed it up well:

And here's journalist Radley Balko, author of “Rise of the Warrior Cop“:

In Afghanistan, we patrolled in big, armored trucks. We wore uniforms that conveyed the message, “We are a military force, and we are in control right now.” Many Afghans saw us as occupiers.

And now we see some of our police officers in this same way. “The militarization of law enforcement is counter-productive to domestic policing and needs to stop,” tweeted Andrew Exum, a former Army infantry officer.

If there's one thing I learned in Afghanistan, it's this: You can't win a person's heart and mind when you are pointing a rifle at his or her chest.