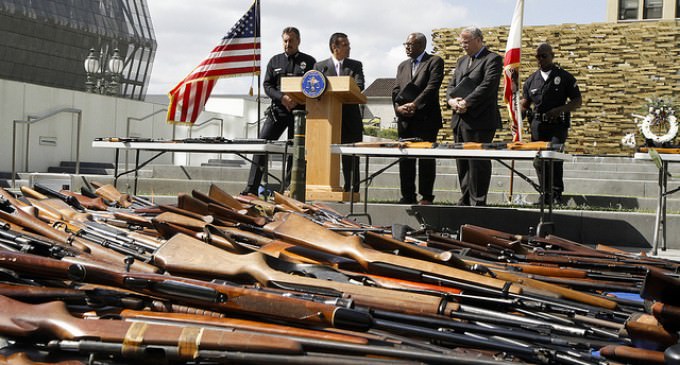 Barack Obama is in his last year as president. He has declared that his effort to “remake” this country means he will try his utmost to implement his most draconian and outrageous goals, one of which is the disarming of America. There is no other way to describe it, and Democratic lawmakers have bought into this absolutely unconstitutional objective, in spite of the objection of their constituents and their declaration to uphold the laws of the land when they were sworn into office.

They have worked hard to indoctrinate children in public schools to believe that guns are “evil,” and that somehow protecting ones life, family and property is unacceptable and improper. They have garbled the language to convince the uninformed that certain types of guns with benign, decorative features are equivalent to military weapons which must be excised from public ownership. Make no mistake, the ultimate goal of the Left is to completely disarm America, an aim the founding fathers adamantly opposed as a sure path leading to tyranny by the government elite.

The attempts to date have been less overt, but still chilling. Government “watch lists” prohibiting gun ownership have been created, with no accountability for how one ends up on such a list, and an impossible bureaucratic mess to be removed from it. The federal government has pushed banks to stop making loans to licensed gun dealers in order to make it impossible to run a retail gun business. And the perpetual call for more invasive and comprehensive “background checks” has been proposed, ensuring that when the government decides to round up all the guns, they will simply check their list and pay a visit to the homes of gun owners.