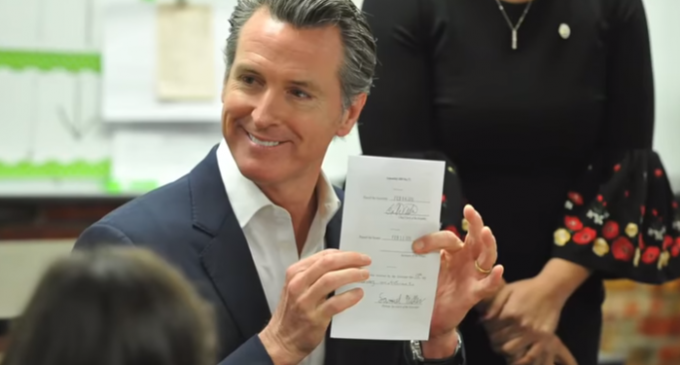 A new California law bars students from suspension for ‘willful defiance.' This is a broad category that includes anything from sleeping in class to disrupting class or willfully defying teachers.

Gov. Gavin Newsom on Monday signed into law Senate Bill 419, which makes willful defiance suspensions a crime in grades four and five, and in grades six through eight for five years. A previous law had already barred schools from suspending defiant kids in K-3.

Although suspension is prohibited, teachers can still remove students from the classroom for willful disobedience. The law goes into effect July 1, 2020.

Proponents point to data by the California Department of Education that shows a racial disparity in who is getting suspended. While black students account for 5.6% of enrollment, they made up 15.6% of all willful defiance suspensions in the 2017-18 school year. Although White students account for 20.2% of willful defiance suspensions, they only make up 23.2% of enrollment.

Sen. Nancy Skinner, D-Berkeley, who wrote the new law, said it would “keep kids in school where they belong and where teachers and counselors can help them thrive.”

California students missed more than 150,000 days of school because of suspensions for unruly behavior in the 2016-17 academic year, according to a California Senate analysis of SB 419.

Skinner and other supporters of the bill argued that students of color are disproportionately affected by such suspensions.

SB 419 “may be one of the best ways to disrupt the school-to-prison pipeline,” Skinner said.

SB 419 was also praised by civil rights activist Dolores Huerta, who said in a statement that, “I strongly believe that SB 419 will bring justice to California youth by eliminating suspensions for disruption and defiance, putting an end to discriminatory discipline policies and instituting restorative justice practices.”

The Alliance for Boys and Men of Color wrote in support of the bill:

”SB 419 would eliminate disruption/defiance as grounds for suspensions for all grade levels and keep more students in schools. If SB 419 is not passed, students will continue to be subject to suspension based on disruption/defiance, which means students will be suspended from school and denied valuable learning time for anything from failing to turn in homework, not paying attention, refusing to follow directions, or swearing in class—including suspensions for just one isolated incident. Because it is so subjective, suspensions based on Section 48900(k) raise serious concerns about
their disproportionate impact on students of color and other vulnerable student groups— including students with disabilities and/or those who are lesbian, gay, bisexual, transgender (LGBT), and/or gender non-conforming. Research confirms that there is even greater disproportionality for students in these groups suspended for low level, subjective offenses, like defiance/disruption, compared to higher level, more objective offenses. SB 419 and the elimination of suspension for disruption/defiance will result in an overall reduction in suspensions and an increase in positive outcomes for students and the communities in which they live.”

“”Charter schools were created to be public schools exempt from most sections of the California Education Code. Imposing unnecessary restrictions on these schools of choice is counterintuitive to the original intent of the legislature. Charter law requires each school’s petition to address issues of expulsion and this law would effectively overwrite the language of 1,300 charter petitions causing significant disruption at the local level. Further, this bill is based on no credible evidence of an expulsion problem in California charter schools. To the contrary, charter schools often serve as a school of last resort of students who have been expelled from traditional schools and these pupils thrive in a charter school environment.”