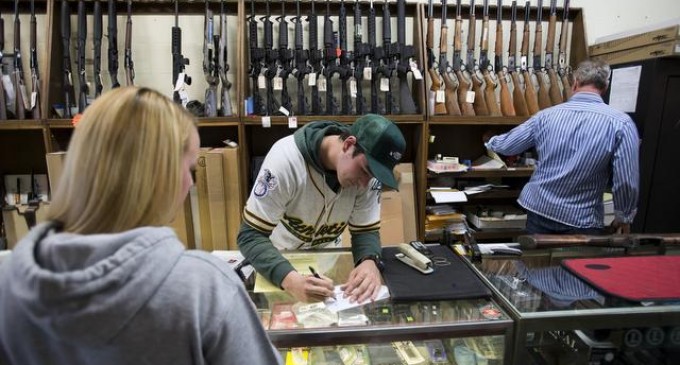 First you get all firearms registered you can, then you confiscate.

That seems to be the plan in California as, starting on Jan. 1, 2014, the California Department of Justice will retain information on long-gun purchases, data it had formerly been compelled to destroy within five days. Dealers will need to register purchases with the state.

Neither Matt Dittmer nor the people he shoots with are happy about a new law that will preserve information about their gun purchases in a California state database. But he is resigned to it.

“I don’t like it, but I’m living in a state where I don’t have a choice,” Dittmer said as he stopped by Auburn Outdoor Sports on a recent afternoon to buy a sleek black AR rifle.

In the aftermath of a horrific shooting at Sandy Hook Elementary School in Connecticut, California lawmakers advanced dozens of gun control measures in 2013. Despite that fervor for tougher firearms laws, the most stringent and far-reaching measures largely failed. The discards included a bill by Senate President Pro Tem Darrell Steinberg , D-Sacramento, that would have outlawed semi-automatic weapons with detachable magazines.

Even as those bills met their demise, a previously passed gun control measure loomed. Assembly Bill 809, signed into law in 2011, imposes on rifles and shotguns the same record-keeping requirements that currently apply to handguns.

Starting on Jan. 1, 2014, the California Department of Justice will retain information on long-gun purchases, data it had formerly been compelled to destroy within five days. Dealers will need to register purchases with the state.

Dittmer said it wouldn’t influence the types of firearms he chooses to purchase, despite his view that the measure is symptomatic of California’s increasingly constricting gun restraints.

“It won’t affect me personally,” Dittmer said, “because I do abide by all the laws.”

While Dittmer said his shooting range compatriots are anticipating the law, it was the first that Nancy Stewart, who had stopped in to pick up a pair of .22-caliber rifles to expand the family collection, had heard of it. Stewart said the measure wouldn’t deter her from buying a gun. But it did give her pause.

“You wonder, what does this information mean?” said Stewart, a 55-year-old paralegal who lives in Grass Valley. “My ultimate concern is if someone knocks on my door and says you’ve got three guns, we need two of them.”

Other reactions among gun advocates range from bewildered to disturbed.

Supporters of the legislation said it closes a dangerous gap in California’s gun laws, creating uniformity in firearms regulations by treating pistols and rifles the same.

“One of the things the Legislature found persuasive is that long guns play a large role in our state’s epidemic of gun violence,” said Juliet Leftwich, legal director for the Law Center to Prevent Gun Violence, one of AB 809’s sponsors.

Dozens of police chiefs backed the bill as an addition to their law enforcement arsenal. They said it will bolster efforts to trace guns recovered at crime scenes and to seize guns from people legally barred from owning them because of past crimes or mental illness. Officials will have more comprehensive gun purchase data to compare against California’s Armed and Prohibited Persons list, a catalog of people banned from owning guns that the Legislature fortified with an extra $24 million this year.