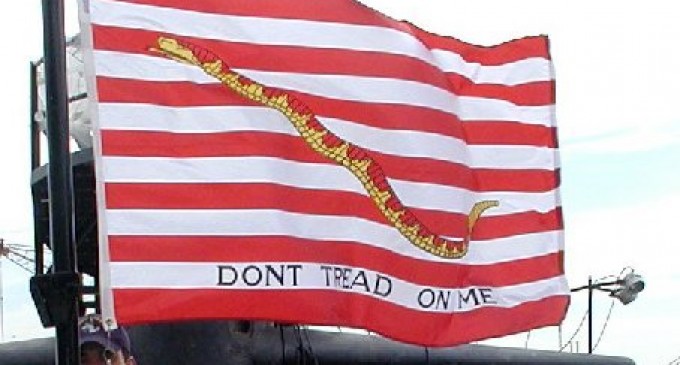 These patches have been used for centuries in our Navy, Obama now wants them removed.

It seems “Don’t Tread On Me” is too much of a symbol of strength of independence.

Our military has also seen 200 of it top commanders fired and DHS is being built up larger than our military!

The writing is on the wall, we are the new enemy.

The Navy “Jack”, or Don’t tread on me flag, has been in use for over 200 years, a part of our naval history for almost as long as we’ve been a country. The flag’s premise is to emit an image of ferocity towards any who would challenge us in battle. SECNAV code 10520.6 clearly directs that all ships will display the flag throughout the war on terror, this was put into effect back in 2002. Now Seal commanders are banning the use of this flag, for what purpose? Is this more of Obama’s will for “his” military?

This administration has turned our once prestigious military into a “kinder, gentler” ( sissified) force. With their continuous changes to the rules of engagement which have already resulted in multiple overseas deaths due to lack of ability to defend when following these rules; to uniform changes that are meant to keep us more friendly to the foreign boy’s dress codes, we are quickly becoming something one would see on Hogan’s Heroes.

This email order recovered for with the new order is as follows:

WARCOM and GROUP TWO/ONE have pushed out the uniform policy for NWU III and any patches worn on the sleeve.

Again the only patch authorized for wear is the American flag on the right shoulder. Please pass the word to all

After demanding explanation for the decision, the only advice given was that the flag is too closely associated with “radical groups”. This should immediately be followed with another round of Q&A: Define radical?

One thing is for sure, if we keep up with the route we’re headed, pretty soon they will be taking weapons from our guys,  and opting for them to use marshmallow shooters with a lot of harsh language. Don’t forget to spit on them boys! Oi..