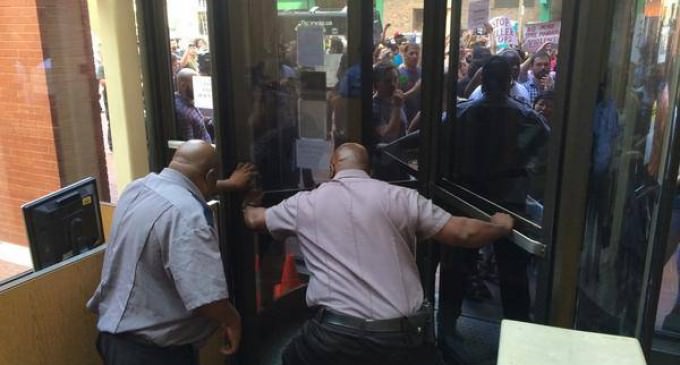 Shortly after Missouri Gov Jay Nixon called in the National Guard to assist with the rioting in Ferguson, protesters responded by storming Gov Nixon´s office chanting “The National Guard has got to go”

Protestors in Ferguson took their rioting and looting to a new level on Monday when they attempted to storm the office of Governor Jay Nixon, calling him out for the use of the National Guard in heeding off violence.

These protestors began marching towards Governor Nixon’s office this afternoon.

Reporters on the scene were able to capture photos of the protestors attempting to knock open the doors as law enforcement officials scrambled to keep the doors shut, preventing the protestors from storming the building.

Early Monday morning, Governor Nixon had announced that he would be using the National Guard after protests Sunday night turned for the worse, with Molotov cocktails being thrown at police and law enforcement responding by throwing tear gas canisters into the crowd.  In a Monday afternoon press conference from the White House, President Obama said that he supported “limited” use of the National Guard to restore calm and order.

This woman was arrested after allegedly blocking the door of the governor’s office.

Many protests have turned violent and led to a curfew over the weekend, which did not go smoothly.  Many people did not follow the curfew, which led to more run-ins with police officers.  The situation continues to worsen, and it does not appear that any peaceful resolution will occur anytime soon.