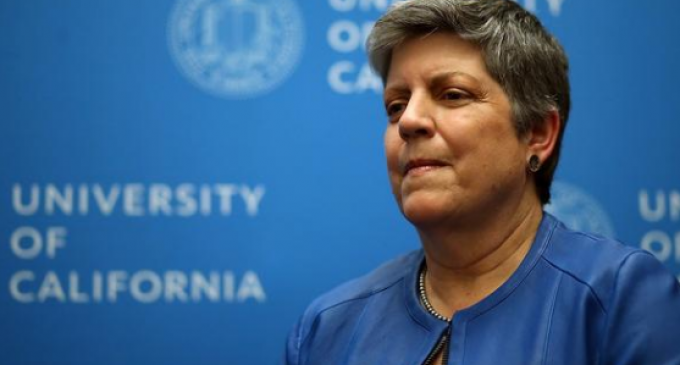 Is it any wonder that California is in the deep financial crisis that it’s currently in when Obama’s tendrils continue to pull the money strings of even the most remote locations.  California is a far cry from being a next door neighbor to Washington, D.C., but the former president’s decisions have come to be a terrible weight on the California taxpayer.

Janet Napolitano, former director of the Department of Homeland Security under former President Obama has been busy since her stint in that office.  Her current job is President of the University of California which oversees the budgets of 10 campuses in the state, of which UC Berkeley is one.

The recent bouts with freedom of speech for Conservative speakers at that university began to call into question the UC president’s hand in the affairs.  In other words, how deep did this rabbit hole go?

As it turns out, UC employees and state lawmakers had the same question.  Rather than just sit back and allow Napolitano’s office to continue to be silent on the issue, they went to the state auditor for help.  What the state auditor uncovered is stunning.

Whether or not you believe that Obama himself has been instrumental in this UC Berkeley anti-First Amendment issue that has resulted in riots, injuries, destruction of property, and arson (for which some have actually been convicted), it is now an undeniable truth that his crony, Janet Napolitano, has.

That is an explosive charge that has been leveled against Napolitano’s office and has resulted in the loss to the taxpayer of as much as $175M!

Not only is the extreme breach of public trust an indefensible position for Napolitano, but also the satellite offenses that go along with it.  The office that she heads is responsible for no less than five charges of malfeasance and misconduct and the state itself is now calling for a complete investigation into her activities and those of her staff.

Interestingly, a few years ago, a similar scandal ripped the veil away from the California Parks Department where its director had been shielding $54M in funding for more than a decade.  The resulting examination into Director Ruth Coleman’s department finances ended with her announcement that more than 70 of California’s parks would be closing due to her shielding of funds for 12 years, before resigning, along with her Chief Deputy, Michael Harris – Democrats all.

Janet Napolitano’s problems go much deeper and it’s possible that her resignation may be coming very soon as well.