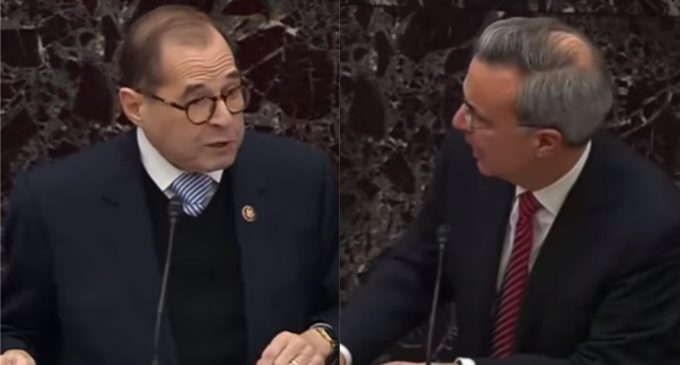 House Manager Rep. Jerrold Nadler (D-NY) gave new meaning to being on a high horse when he blasted GOP Senate members for casting “treacherous votes”, participating in a “cover-up” and voting “against the United States” after the GOP tabled every proposal by Dems that called for witnesses and new evidence at the beginning of the impeachment trial of President Trump.

Senate Minority Leader Chuck Schumer (D-NY) tried to subpoena former Trump National Security Advisor Amb. John Bolton to testify at the impeachment trial, which flies directly into the face of claims made in the House by the Democrats carrying out this grand facade that they had incontrovertible evidence of presidential wrongdoing that was completely and utterly damning. The Democrats had already called 14 witnesses for their impeachment farce and now they need more?

White House Counsel Pat Cipolline cut Nadler down to his proper size with a great reprimand.

Turn the page for details plus video.