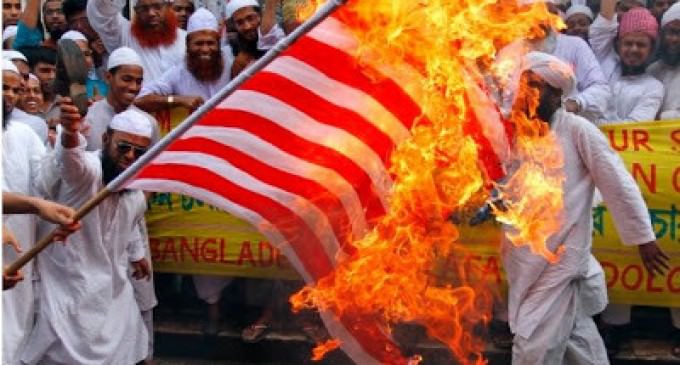 Following the brutal murders committed by an Islamic terrorist couple in San Bernardino, California, there were a number of polls testing the opinion of American citizens regarding potential Islamic immigration. President Barack Obama was inviting thousands of Syrian refugees to settle in the U.S., purportedly Syrian families who were fleeing a civil war in their country.

Prior to the San Bernardino killings, Muslim Jihadi killed 130 Parisians in multiple locations, showing that they could strike anywhere with brutal and broad based strategies. Following these two incidents, ISIS, the Islamic terror organization, declared that they were using the American refugee program to sneak murderous jihadi into the U.S. under the guise of families fleeing the violence in Syria.

Obama used the refugee program to bring in tens of thousands of families, in spite of the objection of the residents in several states that were used as dumping grounds of these families. Obama was completely disinterested in the objections of the citizens who were being forced to host these families, particularly after the attacks in Paris and San Bernardino.

The attacks put new emphasis on the inability to effectively vet the incoming individuals, particularly after some of the officials in the immigration department confirmed that they could not accurately check to see if the incoming migrants were Muslim terrorists. Obama then went on a shaming tour to insult and denigrate American citizens who were worried about their own safety, and he demanded that they accept without reservation the coming crowds of unvetted Islamic immigrants.

Several of the GOP presidential candidates weighed in on the debate, most prominently Donald Trump, who stated that Muslim immigrants should be prohibited from immigrating to the U.S. until the immigration service had been upgraded and could ensure that immigrants coming in were not a danger to American citizens. With that, a firestorm erupted, with Democrats and Obama calling Trump and anyone who agreed with him a bigot and a religious persecutor. However, many citizens agreed with Trump and indicated that the job of the president and his immigration department is first and foremost to keep Americans safe.

There is a very clear division of how the problem should be dealt with when questioning Democrat or Republican audiences, a situation which will undoubtedly change after the next Islamic terror attack on America soil takes place, as it inevitably must. However, it is interesting to contrast the relatively magnanimous spirit of Americans towards Muslims in the wake of violent attacks with polls of various Middle Eastern or majority Islamic nations on their attitudes towards America.

Opinion of Islamic nations towards U.S., next page: