Ahmad says she suffered “humiliation” and “discrimination” because a nearby passenger asked for, and received, an unopened can of beer.

“I am in tears of humiliation from discrimination,” Tahera Ahmad, a Muslim chaplain at Northwestern University in Illinois, wrote on Facebook from the Chicago to Washington flight, tagging her post #IslamophobiaISREAL.

Ahmad said that when the beverage cart came out, she asked for a Diet Coke. The flight attendant gave her an open can, but for “hygienic reasons,” Ahmad asked for a can that had not yet been opened.

“She said no one has consumed from the drink, but I requested an unopened can. She responded, ‘Well I’m sorry I just can’t give you an unopened can so no Diet Coke for you,’” Ahmad wrote.

Ahmad wrote: “So I told her that she was clearly discriminating against me because she gave the man next to me an unopened can of beer. She looked at his can, quickly grabbed it and opened it and said, ‘It’s so you don’t use it as a weapon.’”

Ahmad said that she was “appalled” by the flight attendant’s behavior and asked those sitting by her “if they witnessed this discriminatory and disgusting behavior.”
She wrote that a man sitting in an aisle seat across from her yelled out to her: “You Moslem, you need to shut the F** up. … yes you know you would use it as a WEAPON so shut the f*** up.”

As it turns our, Breitbart has uncovered the fact that Ahmad has ties to radical Imams that use deceptive tactics for the purpose of implementing Sharia law. It has come to light that Ahmad has attended several conferences over the past few years that were hosted by front groups for the Muslim Brotherhood. You can see her posing with members from these groups below.

This being true, we might not see this woman file a lawsuit for want keeping this under wraps.

Ahmad has shown to have an affinity for radical Islamist groups that seek to employ deceptive tactics in order to advance Sharia law, Breitbart News has found. Ahmad has attended and participated in multiple conferences over the past couple years which were hosted by alleged Muslim Brotherhood front groups. She has also proudly written about, and has happily posed in photos with radical Imams.

One month earlier, Ahmad posted a picture to Facebook of her standing next to Suhaib Webb, who is the Imam of the Islamic Society of Boston, an outfit run under the same umbrella organization as the mosque attended by Boston Marathon bombers Dzhokhar and Tamerlan Tsarnaev, and a plethora of other convicted terrorists. Webb has a demonstrated history of radical connections, including him being a close confidant of Al Qaeda mastermind Anwar al Awlaki prior to the 9/11 attacks.

Ahmad is “well-known” to Yasir Qadhi, a cleric who she has frequently invited to speak to the student body at Northwestern. An audio tape of one of Qadhi’s sermons revealed that he once called for Muslims to wage holy war against non-Muslims. During his speech, Qadhi went on to discuss how he did not believe that the Holocaust had ever occurred.

In April 2014, Ahmad joined an MPAC (Muslim Public Affairs Council) delegation of American Muslim women, who partnered with the White House “to host a historic forum recognizing the contributions of American Muslim women.” MPAC, like the MAS and ICNA, was originally founded by members of the Muslim Brotherhood. The group has in the past endorsed a paper that rejects the designations of Hamas and Hezbollah as terrorist organizations. In 2009, the group hosted a protest where demonstrators called for the annihilation of the State of Israel.

In 2013, she recited the Quran at the annual ISNA (Islamic Society of North America) convention. Declassified FBI documents found that the Bureau regarded ISNA as a Muslim Brotherhood front group. The FBI also found that ISNA was founded by prominent members of the global Muslim Brotherhood organization. Ahmad’s bio states that she has “supported leadership for premier Muslim organizations including [ISNA].”

The Gateway Pundit seems to have scoured the Internet and found a report from a passenger aboard the flight where Ahmad claims she was discriminated against. It has also been discovered that this wasn't the first time she has played victim, as one Twitter user suggested “I guess movie theaters aren't safe for her either”.

But it was all a lie…
A passenger on the plane says the woman is lying.

A commenter at FlyerTalk has a different take on the story:

I was actually on this flight on Friday evening from ORD to DCA. I have been a reader of this forum for a long time but seeing this all over the news made me sign up so I could tell you what really happened here and hopefully stop this liar in her tracks. I was sitting close enough to her to hear everything that was said. The flight attendant came up to the lady (I believe she even took her order first in the entire cabin as she was seated in the bulkhead 7d) and took her order. She ordered a coke zero and a hot green tea with a Splenda. The flight attendant handed her a full diet coke with a cup on top and then told her that the green tea would take a few minutes and she would get it to her ASAP. The lady said very rudely and condescending to the FA that she ordered a coke zero and basically pushed the soda back to the flight attendant. The FA said she was sorry and attempted to find a coke zero for her (which she did not have many of) and told her that she could only give her a portion of the can not the full can. This is when the lady in question started to freak out and told the FA “What do you think I will use this as a weapon?! Why can’t I have the whole can? I think you are discriminating against me. I need your name….” The lady just kept yelling to her “I need your name… I am being discriminated against.” This is when a few passengers told her to calm down and one guy told her to “shut her mouth and she is being ridiculous over a can of coke”. No one ever said anything anti-Muslim to her at all. She was the one who started screaming discrimination when she did not get what she wanted. The FA asked her numerous times if she would like anything else when the lady just basically pushed her away with a hand in her face. The lady then got onto her phone with her credit card and paid for the internet so she could start spinning this story on social media and she was never in tears. This person is a liar plain and simple and is just pulling the discrimination card. 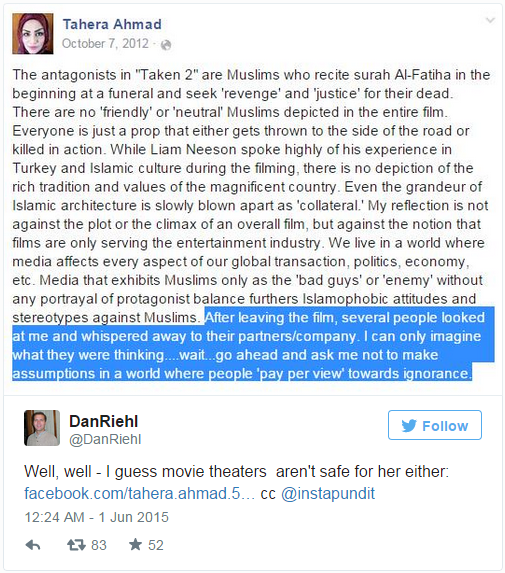