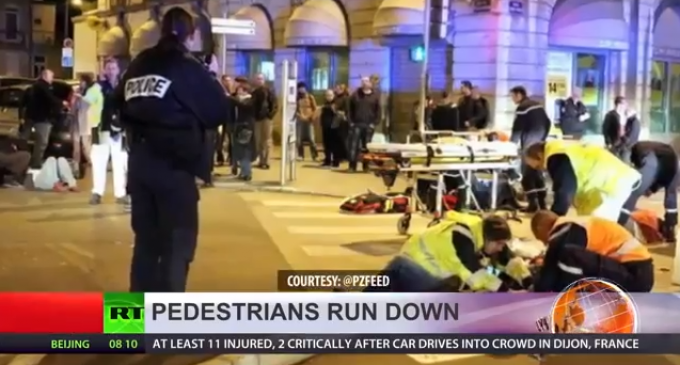 Islamic terrorism has once again struck France, with a man driving his vehicle into about a dozen pedestrians, while shouting “Allahu Akbar”.  The forty-year-old driver ran through groups of people in five different areas of Dijon, injuring eleven, with two of them seriously hurt.

Those on the scene reported that the driver also cried out “the children of Palestine” to justify his actions.  Though he worked alone, he was not new to criminal activity, as he committed crimes back in the 1990s.

His terrorist actions can be added to the growing list of Islamic radicals actively participating in jihad on the French people.  Just one day earlier, near Tours, another man who stabbed three police officers shouted out “Allahu Akbar” in the midst of his crime spree.  He was shot and killed by a French policeman.

There is no end of jihad in sight for France, as it’s Muslim population is the second largest in Europe, with 4.7 million. Read more about the terror attack on page two.