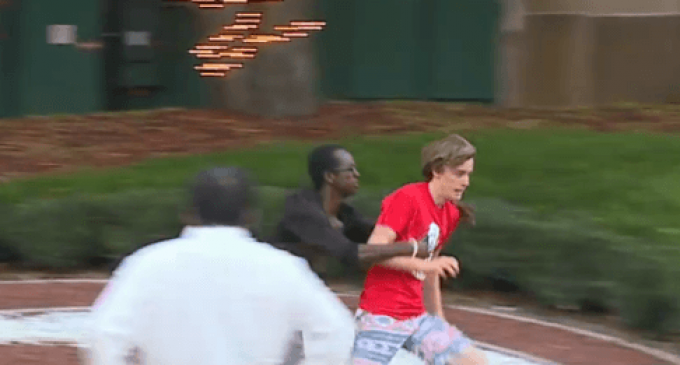 For the entirety of the Republican primary, protestors have aggravated, assaulted, and caused general mayhem anywhere Donald Trump has been scheduled to speak. Despite the violence, the press largely ignored the phenomenon, or somehow managed to blamed it on Trump himself.

Despite the media's lack of interest, the protests at Mr. Trump's western rallies have become too big to ignore. Rallies in Costa Mesa, San Diego, Anaheim, and Albuquerque have all been witness to gratuitous acts of vandalism and violence, and Trump's latest rally in San Jose has proved no different. Many have blamed the increased chaos on the region's extensive Hispanic population — a hard truth to deny when protestors are brandishing the Mexican flag — but that accusation ignores many other minority groups that have decided on violence would as their chief protest strategy.

Other than those of Mexican decent, Muslim Americans have likely found more to loath about the billionaire businessman than any other group in the United States. Some of this comes from Donald's official stance on Muslim alien immigration, but much more can be blamed on the false narrative pushed by the mainstream media that accuses Trump of peddling extreme Islamophobia.

It should come as no surprise, then, that some are using their Muslim faith as an excuse to step-up the violence displayed at Trump's recent rallies.

See the admissions of one such man — with video — on the next page: