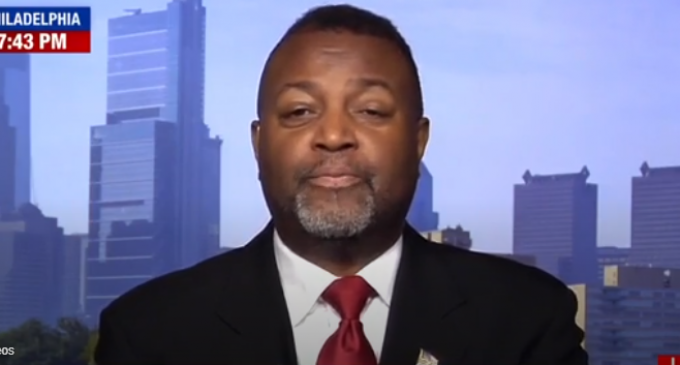 The left continues to get more radical with their accusations against our President. The latest appears to be the accusation that he is somehow sending secret messages to ‘white supremacists’ across the nation.

Just yesterday, we saw former FBI Assistant Director for Counterintelligence Frank Figliuzzi tell Brian Williams on MSNBC’s The 11th Hour that President Trump is sending a coded message to the “white supremacist movement” by choosing 8/8 as the date to re-raise the U.S. flags that were flying at half-mast due to the deadly shootings in Dayton, Ohio, and El Paso, Texas. 88 is a numerical code used by white supremacists for “Heil Hitler.” H is the eighth letter of the alphabet, so 88 = HH = Heil Hitler.

I think that we’re finally in for a great societal change where we’re finally addressing this issue… I wrote a book last year called, ‘The Plot to Destroy Democracy,’ one of the chapters I led off with the massacre of 68 children in Norway by the original white supremacist terrorist who created the concept of this terrorist manifesto, Anders Behring Breivik. He did that because he thought “The Great Replacement” was underway in Norway and the government was allowing unbridled immigration into that country. So in his trial, he said he massacred those children because he wanted to eliminate the next generation of liberal leadership from Norway as a warning. This country has had several of these mass incidents, but I think we’re overdue for a Breivik-style real massacre of a political nature.

These people feel that they are the foot soldiers and executors of what the disenfranchisement that the white race is feeling and Donald Trump is giving them subliminal orders in their head. They are no different than the mobilized, self-starting, self-radicalized terrorists of ISIS here in the United States and Europe, who take cars and drive down streets. It’s just that they have a permissive environment in which they can get firearms and go out and attack their perceived enemies.