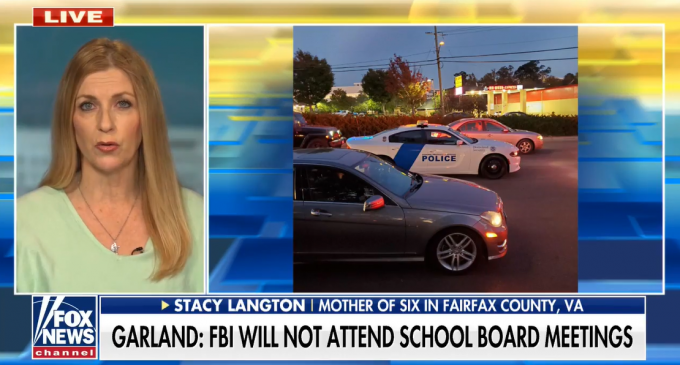 A mother of six in Fairfax County, Texas claims that police and federal agents showed up at their local school board meeting in unmarked cars and a helicopter ‘circling overhead with a spotlight on Moms & Dads' last week.

Stacy Langton had previously complained that kids were being exposed to pornography and pedophilia in the school curriculum.

Langton posted images on Twitter showing police cars, a Department Of Homeland Security vehicle and what appears to be an unmarked federal cruiser. Although there were no pictures, she also claims the helicopter was circling overhead shining a spotlight on parents before and after the board meeting.

Attorney General Merrick Garland told Rep. Jim Jordan at a House Judiciary Committee hearing that “FBI agents will not be attending local school board meetings and there is nothing in this memo to suggest that.”

But, you know, that was so last week.

Go to the next page to see Langton's tweet and interview on FOX News.