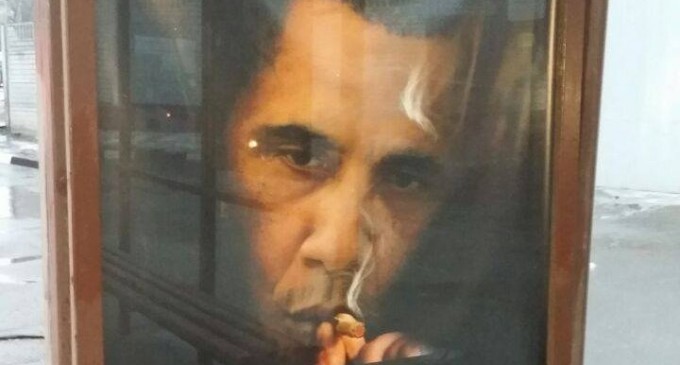 In the sort of propagandist agitprop that used to be a big part of Soviet Union cold war tactics, and which remains a lively element of Russian Federation political campaigning, an anonymous anti-smoking campaign poster in Moscow uses our very own backstabbing Kenyan-in-chief to encourage Moscow citizens to put down their cigarettes.

With a scathing criticism of the Kenyan as its anti-tobacco message, the advertisement has certain elements of the Russian Parliament angry at the anonymous artistic wonk responsible for the poster.  Dmitri Gudkov, the sole self admitted leftist in the Russian Parliament (the rest of them refuse to own up to their leftism), objected to the advertisement, saying it had no place on the street of Moscow.

Now while I thought the poster's message was both succinct and accurate as translated by The Guardian paper in Britain, Gudkov claimed that ‘soon people will be scaring their children with Obama rather than Baba Yaga” referring to an ancient Russian folk character commonly portrayed as a witch living in a cottage that strolled about on giant chicken legs.

Continue on to the next page to see the exact translation of this now controversial sign and further comments from Moscow citizens.