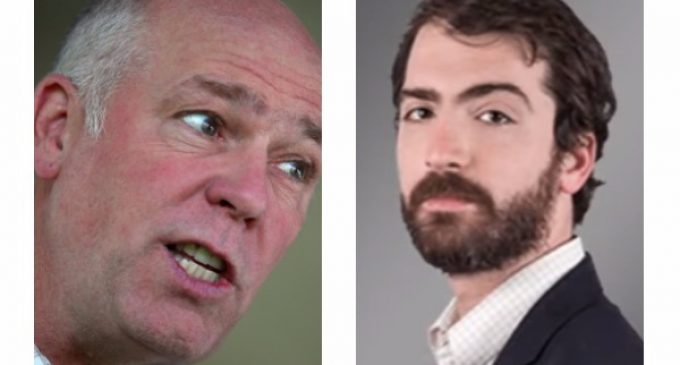 In the State of Montana, Greg Gianforte is possibly beating himself up today after a very bad judgment call in roughing up a Guardian reporter at an event where the candidate was setting up for an interview with Fox News. However, some voters appear to have appreciated the incident and one source even claim that Gianforte’s campaign funds saw a boost after the alleged ‘body slam’.

The incident took place at an event that was referred to as a volunteers barbeque and capped off a very rigorous campaign where Gianforte is running against Democrat Rob Quist.  The seat for the U.S. Representative became vacant when Ryan Zinke was tapped by President Trump to fill the Secretary of the Interior position.

The Guardian, the Missoulian, and other Left-leaning newspapers have been going after Gianforte in a seemingly endless stream of negative stories since the special race had been initiated for the vacant seat.  The race has been interesting, to say the least, where both candidates have been taken to task for their so-called “gaffes” on an array of subjects and issues.

Quisp, an ardent Sanders supporter, constantly rails on corporate America (you know, those guys that are actually employing people who “didn’t build their business”) and has stated that we don’t need another millionaire in Congress.  While I agree with that last statement, I don’t think someone who believes that wealth needs to be re-distributed by a governmental body more well-known to pay $600 for a toilet seat should be in that seat either.

For his part, Gianforte is also an outspoken critic of the mainstream media and that is something we can all get on board for; unfortunately, there are ways to deal with unsavory reporters that don’t result in assault charges and national stories on MSNBC that involve the words “body slam.”  I’m not sure exactly what happened, and really, neither does the media because there is only audio that captured the tousle, but it was witnessed by the entire Fox News team that was assembled for its interview with Gianforte.

Typically, in cases like this, it’s a pretty cut-and-dried case because there is normally video from someone’s phone that records the action.  In this case, the altercation happened so quickly that no one had the chance to record it.  From the audio on the next page, you can hear for yourself how quickly the situation turned from seemingly innocent to crazy.