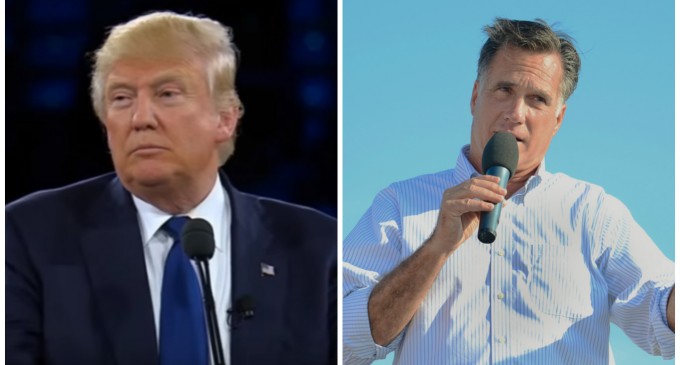 Speaking at a dinner for GOP members earlier this week, the 2012 Republican nominee took another swipe at the current party frontrunner. The jab comes sometime after more pronounced criticism made by the former Massachusetts governor.

Whereas before Romney attacked Trump's policy proposals and ideas, the governor stooped particularly low in his newest attack on the candidate. Not content with simply belittling Trump on a personal level, he went out of his way to belittle his loved ones.

Read more about Romney's crude remarks on the next page:

Calling attention to the fact that Trump has been married to several women who were born in different countries, Romney reportedly mocked them for being romantically involved with the real estate tycoon. Astonishingly, he is said to have joked, “It turns out that there really are jobs Americans won't do” in reference to this fact.

Again, the hypocrisy of both Republican insiders and the media are exposed for all to see. If it was Trump who uttered this or anything even remotely close to it, they would be throwing a massive hissy-fit. But if Romney says it, that's okay, it's just a joke, no harm no foul:

“Two of Trump’s three wives were from other countries. Ivana, Trump’s first wife, was born in Czechoslovakia and Trump’s current wife Melania is from Slovenia.

Trump previously took a swipe at Romney, questioning whether or not Romney was Mormon during a campaign rally in Utah.”