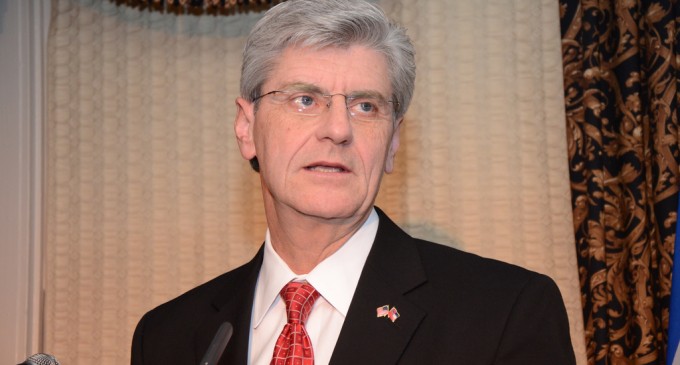 Mississippi Gov. Phil Bryant sent a letter to Obama stating he would not allow the federal government to bring illegals into his state.

“To the extent permitted by law, I intend to prohibit the federal government or its agents from housing large numbers of new illegal immigrants in the state of Mississippi,” Bryant wrote.

“Illegal immigration imposes real and substantial costs on the states, and it is unfair to expect the states to bear the costs of a problem created by the federal government’s failure to enforce the law.”

JACKSON — Mississippi has received fewer than 200 of the unaccompanied immigrant children who crossed the U.S. border and were released to sponsors so far this year, but the war of words over such children continues within the state.

The U.S. Department of Health and Human Services’ Administration for Children and Families released data yesterday showing that sponsors in Mississippi received 179 of more than 30,000 such children nationwide from January 1 to July 7.

California, Florida, New York and Texas received the most children in the past half year, accounting for 46 percent of the children released to sponsors.

Gov. Phil Bryant, a longtime opponent of illegal immigration, said it was “troubling” that the federal government was sending children to Mississippi without consulting him, calling the moves “covert immigration practices conducted by an overreaching federal government.”

Bryant, a Republican, wrote to President Barack Obama on Friday demanding that Obama pre-announce plans to send immigrants to Mississippi and saying Mississippi would block transports.

Bryant, who accused Obama of having “lax immigration policies and flagrant disregard for federal immigration law” noted a 2012 executive order he signed that’s meant to bar immigrants living in Mississippi illegally from receiving public benefits. Yesterday, he threatened immediate action against any official who violates that order by giving food stamps, non-emergency medical benefits or welfare payments to the children.

The Mississippi Immigrant Rights Alliance held a news conference yesterday to decry Bryant’s letter, saying Mississippi should welcome children in need and afford them a chance to go through deportation hearings under federal law.

“We’re very concerned about the xenophobia in the letter that was put out by the governor,” said alliance Executive Director Bill Chandler.

“We have a moral obligation as Americans and as decent human beings to do the right by the kids that have, against the odds, reached our border,” Thompson wrote. “Many Mississippians agree on this — you can count me among them.”

Photo: Consulate General of Israel To the Southeast