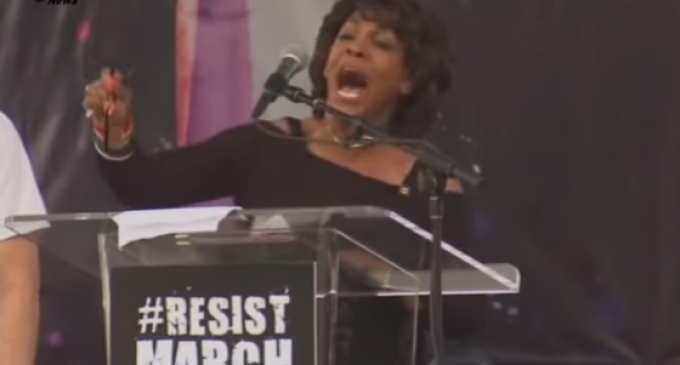 Maxine Waters is to the Left what David Duke was to the Right.  If none of you remember David Duke, he was a Republican candidate who apparently woke up one morning and decided he was no longer an Imperial Wizard of the Ku Klux Klan.  When he first came to recognition in the political realm, to say that Republicans distanced themselves from him is an amazing disservice to understatements.

Waters has the same problem with the Left.  While she is wildly popular with the Griffin-esque faux-ISIS warriors that hope to someday aspire to the level of executioner, Waters has had her moments of letdown where she labors under the illusion that the upper echelons of Progressive royalty are “down with the struggle.”  She is under the false impression that the Democrat Party actually, LITERALLY, stands for the oppressed and the downtrodden, the castaways from society and the ne'er-do-wells.  I'm not saying that it's her fault, by no means.  She is exactly like the millions of disenfranchised Blacks in America who have been led to believe the total fantasy presented by the Left.  When I speak about disenfranchised, I'm not talking about Right wingers blocking her from the voting booth.  I'm talking about the Black American who is kept from the horrid truth and history of her own party and led to believe that the people who run the party actually care what the heck she's concerned about as a representative of the people.

The same goes for the Republican Party.  If any Right winger labors under the misconception that party leaders actually stand for things like Term Limits, or cutting taxes, or Pro-Life issues, they are also barking up the wrong tree.  The Republican Party is an organization conceived and built to make its national chairpersons and committee wealthy…simple.  Just like any company or corporation, they are there to make people money.  And if anyone is under the impression that the Democrat Party is any different, they are not living in reality.

Because of this exact situation, where the party leaders have a completely different and separate agenda than the poor saps stuck at the bottom of the pyramid, you have events where people like Waters have their mics cut when they venture too far into Stupid-Land.  And speaking of Stupid-Land, the Queen of that region recently spoke at an LA Pride event where she, as necessary, told the crowd that she will never accept “HIM” as her president.  Turn to the next page for the shameful video…nextpagelink][/nextpagelink]