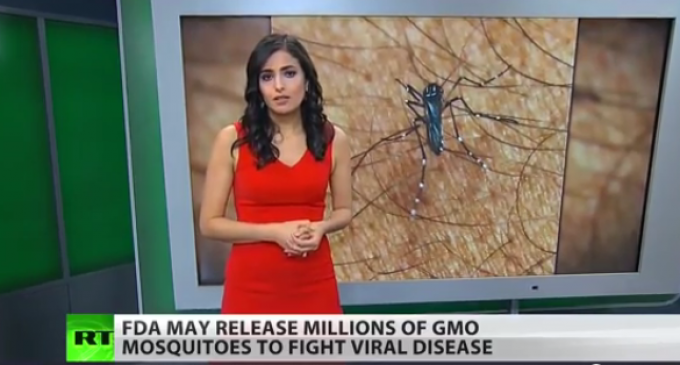 If British researchers have their way millions of genetically modified mosquitos will be set loose in the Florida in a large experiment to combat two viruses, dengue and chikungunya.

This would be the first time GMO insects would be set loose in a residential U.S. neighborhood and 140,000 protesters have signed a petition to stop the release.

For many years, the neighborhoods of the Florida Keys have been sprayed with insecticides to ward off a host of bugs, including perhaps the mother of all pests, the mosquito. Over time, however, Aedes aegypti, a mosquito that can spread the dengue fever, chikungunya, and yellow fever viruses has built up resistance to many of the insecticides used to kill them.

According to Oxitec’s website, the process involves injecting a “lethal gene” into either the male sperm or female egg that eventually kills the offspring.

Change.org, the world’s largest petition platform, presented some of the unintended consequences of releasing millions of mutant mosquitos into the Florida Keys. For example, would the more virulent Asian tiger mosquito, which is also a carrier of dengue, “fill the void” left by a drop in Aedes aegypti populations? Or will the dengue virus mutate and become even more deadly?

The group calls efforts to introduce genetically modified mosquitos a “radical approach” since dengue fever has been absent from Key West since 2010. The group says this “indicates the current methods of control and public education are working.”

Oxitec says only non-biting male mosquitoes would be released, while attempting to assure the public that no genetically modified DNA would enter the bloodstream in the event of a bite from an overlooked female specimen.

Experts, however, question the claims.

“I think the science is fine, they definitely can kill mosquitoes, but the GMO issue still sticks as something of a thorny issue for the general public,” Phil Lounibos, a researcher at the Florida Medical Entomology Laboratory, told AP.

“I'm on their side, in that consequences are highly unlikely. But to say that there's no genetically modified DNA that might get into a human, that's kind of a gray matter.”

Oxitec spokeswoman Chris Creese said the experiment will be similar in size to one held in 2012 in the Cayman Islands, where 3.3 million genetically modified mosquitoes were set loose over a six- month period, resulting in the elimination of 96 percent of the targeted insects, AP quoted.

Critics say the British firm failed to notify residents about the possibility of being bitten by a few females overlooked by the researchers.

As more people question anything genetically modified, especially something that has the potential to suck their blood, resistance to the idea is growing. Already, almost 140,000 people have signed a Change.org petition to halt the experiment.

FDA spokeswoman Theresa Eisenman said no experiments with the modified bugs will be permitted until the agency has “thoroughly reviewed all the necessary information.”

Marilyn Smith, a Florida Keys resident, wasn't sold on the plan following Oxitec's presentation at a public meeting. Smith asked “why are we being used as the experiment, the guinea pigs, just to see what happens,” AP quoted her as saying.