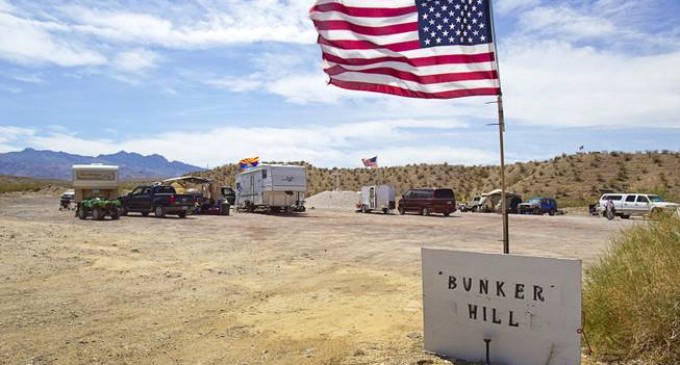 Members from different militia here in the US are now going on the offensive against the federal government.

A handful of men and women in militia groups that have been defending Cliven Bundy moved on to Utah this past Saturday to protest more claims by the BLM.

A protest at Recapture Canyon, Utah took place this past weekend when patriots drove ATV's into areas designated by the BLM as off limits, although it's not know why this particular site was selected for protest as we've seen other abuses by the BLM in other areas.

The Bureau of Land Management, the Utah attorney general's office, the Utah Department of Public Safety and San Juan County Sheriff Rick Eldredge all decided to “stand back” during this protest and avoid a confrontation, just letting the protest happen.

Once again, the feds and local force chose to not fight straight out.

“It was decided that, at the end of the day, it is not worth it to spill any blood,” said San Juan County, Utah, Sheriff Rick Eldridge.

It seems the BLM has awakened a certain segment of American patriots that are now on the offensive!

What will our federal government do next in response to this offensive move by militia?

Militiamen and woman camping on Cliven Bundy’s cattle ranch are packing up and heading to Utah where another protest against the Bureau of Land Management will happen Saturday.

Ryan Payne, a Montana resident who had been staying at the ranch for a month, said he drove eight hours to arrive in the eastern Utah town this morning. Three militia members from the ranch and a handful of people from a group called Citizens Action Network came to Utah, too, he said.

“This is where it’s happening Saturday,” he said.

They and others Saturday will be armed, he said, and ride ATVs into Recapture Canyon, an area the BLM declared off-limits to motorized vehicles in 2007. The ride is organized by San Juan County, Utah, Commissioner Phil Lyman.

Payne met Friday morning with the San Juan County, Utah, Sheriff Rick Eldridge. Afterward, he said he expects Saturday’s protest to be peaceful because Eldridge pledged to “protect us from the BLM.”

Payne characterized their discussion, saying Eldridge has contacted other sheriff’s departments who “stated that if he needed support to get the BLM out of there, they would help.”

Also in Utah this week, two people in a pick-up confronted a BLM wrangler on Interstate 15. They drove by wearing hoods and held a sign that said, “You need to die.” One of the men pointed a handgun at the wrangler, according to the Salt Lake Tribune.

At Recapture Canyon, federal officials aren’t planning to send armed federal agents to the Utah protest like they did with the Bundy ranch in April. The BLM’s show of force, including tasering one of Bundy’s sons, helped spark a heavily armed confrontation between federal agents and the Bundy militia on April 12.

Megan Crandall, BLM Utah spokeswoman, told The Durango Herald the BLM will not be sending “reinforcements” to the area.

Eldridge was out at the scene of tomorrow’s protest, a woman who answered the phone at the San Juan County Sheriff’s Office said. She pointed to the office’s Facebook page, which contained this statement today:

“San Juan County Sheriff's deputies will be at the event in Recapture Canyon on Saturday, May 10th. Our deputies will be there to keep the peace and protect the Constitutional rights of everyone involved. We feel this will be a peaceful event and encourage everyone to be respectful to one another and allow individuals to exercise their First Amendment right.”

Payne said Eldridge’s stance is “180 degrees” different than the reaction from the Clark County sheriff’s office during the Bundy-BLM confrontation.

But this canyon — so close to Blanding, Utah, that locals there consider it their wild backyard — is also the site of a long-standing but escalating anti-federal government, Cliven Bundyesque furor.

On Saturday, protesters plan to drive their ATVs past a “closed to motorized use” sign and into the 11-mile-long canyon to show their disdain for the Bureau of Land Management's decision to keep that area off-limits to vehicles.

The BLM — after a huddle with the FBI, the Utah attorney general's office, the Utah Department of Public Safety and San Juan County Sheriff Rick Eldredge — has decided once again to “stand back” and avoid a confrontation as it did several weeks ago on the Bundy ranch in Nevada, Eldredge said.

“It was decided that, at the end of the day, it is not worth it to spill any blood,” Eldredge said of the decision.

But Juan Palma, Utah's director of the BLM, issued a less conciliatory statement.

“The BLM-Utah has not and will not authorize the proposed ride and will seek all appropriate civil and criminal penalties against anyone who uses a motorized vehicle within the closed area,” Palma's statement read in part.

It's anybody's guess as to how many ATVs will converge on the town of 3,500 for the Recapture protest and for what may or may not be a showdown.

An Anasazi ruin is built into a cliff close to “Lem's Trail” in Recapture Canyon. (Scott Sommerdorf, Salt Lake Tribune)

The protest was planned initially by San Juan County Commissioner Phil Lyman as a local event. But that was before the world's attention was drawn to the feud over cattle grazing between Nevada's Bundyand the BLM. Bundy's stand against the BLM sparked a new outburst of this-land-is-my-land anger at the federal government and its public-land policies and brought domestic militia groups to a rural patch of Nevada.

San Juan County, with more than 90 percent of its land public or belonging to the Navajo Nation, is a likely setting for another set-to.

It has long been a hotbed of far-right anger over federal intrusion into local affairs, especially after what were viewed locally as heavy-handed federal raids that rounded up dozens of longtime residents for artifact looting in the 1980s and in 2011.

BLM employees in San Juan County have had windows shot out of their homes and their yards torn up by ATVs in the middle of the night.