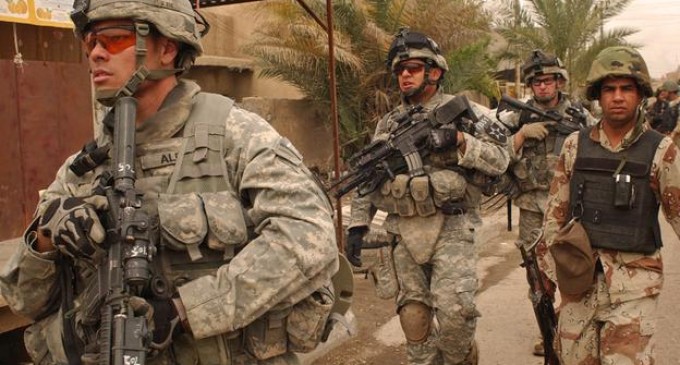 Army veteran, Matt Pearson: the military is training to fight gun owners and veterans, who being labeled ‘terrorists'

Recent letter from active soldier: “Here’s the problem for us soldiers: we can’t trust each other, as there are those who are extreme liberals, socialists, and those who love the current administration.”

Our military is currently gearing up for a war within America. The socialists that have taken over this country are currently winning – having divided and conquered our military that will one day be walking our streets in a martial law scenario or fighting amongst themselves in a civil war.

The old ‘divide and conquer' strategy is alive and in full operation to bring down this once mighty nation.

A soldier’s letter sheds chilling revelation from a militant’s point of view on what President Barack Obama and the current Administration are doing to the U.S. military.

“Here’s the problem for us soldiers: we can’t trust each other, as there are those who are extreme liberals, socialists, and those who love the current administration.

We’re infiltrated with these traitors and we don’t know how to organize without others turning us in and sabotaging our plans. That’s just one problem. Outside of that, as an organization we have become plagued with dysfunction, toxicity, illness, injuries, and betrayal.

It does not allow for a good foundation at the current moment for us to clean house for a country.

They know this. They created the environment as it is right now. We didn’t see it until it was too late. Militants are forming, but in small pockets, and unable to fully unite and plan our strategies in secrecy. And there are watch dogs out there watching us attempt to plan.

I’m sure every word I am typing right now is watched. There is no privacy in which we can operate on our own soil. Our best efforts will only be when they place us on orders against you. That is when we will know what soldiers will bleed for you, and which are loyal to this regime.”

The most disturbing detail about this letter is that it isn’t coming from a politician, comfortable in their government office, but a soldier, steeped in the reception of a war on our military and the American people it’s sworn to defend.