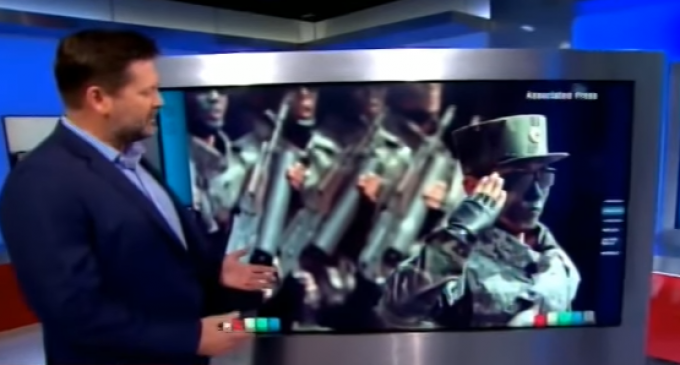 Reminiscent of the large-scale Soviet Union military displays that used to be televised back in the seventies during the Nixon and Carter years, Pyongyang put on its own military parade on the 15th of April to commemorate the 105th birthday of the founding father of North Korea, Kim Il-sung, grandfather to its current leader.

Unlike the massive spectacles put on by the Russian empire, however, military experts in the U.S. insist that the North Korean display was complete fantasy.

Military analyst and former intelligence officer, Michael Pregent was asked to examine detailed photos from the North Korean celebration, in particular close-up pictures of the soldiers involved in the parade.  His conclusions were startling.

If you look at Kim Jong-un as a small dictator who is surrounded by enemies, but has some big friends in the immediate neighborhood, he has some latitude to be brash, provocative, and downright rude to superpowers in the world he views as bullies.

Since the United States has been “pushing his buttons” of late, the North Korean dictator has found it necessary to take out his big-boy pants and show that he can be a world player militarily as well.

Jong-un's idea of a show of military force happens to be a page ripped right from the Communist playbook from the 1970s.  He assembled a very large-scale display of his best and brightest with their gargantuan array of weapons and missiles in an effort to beat his chest the loudest.

When an American intel officer had a look at these photos from the gathering in Pyongyang, he was somewhat insulting about their façade, calling it “more about sending a message than being combat effective.”

Going through the photographs one by one, he began to notice a pattern, especially in regard to the “commandoes” and their weaponry.  In an effort to inject a bit of reality, he admitted that the North Koreans probably have a substantial cache of RPGs, as they have shown a willingness to use those in military exercises quite frequently.

Once Pregent got down to the meat of the interview, he unleashed his opinions as to the photos and the conclusions to which he had reached regarding the North Korean army's combat readiness.

Page over to read his shocking conclusions…