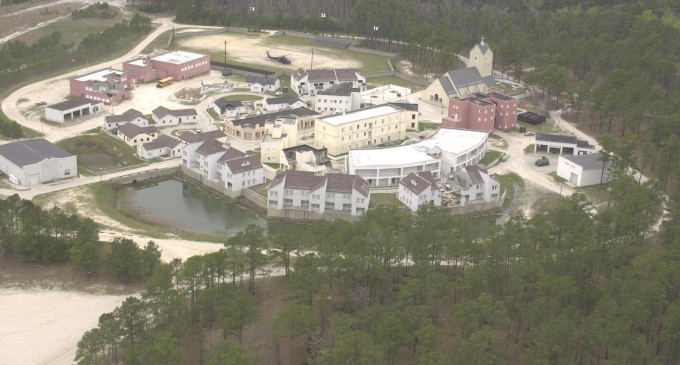 A military urban training center, which is a mock 30-acre town located on Camp Lejeune in North Carolina, has been recently upgraded to look more American than the ‘international city' it once did, adding a Baptist church, a police station and several farmhouses.

Just last February we posted a story of another fake “American looking” city, equipped with our street signs, a church and an underground subway system nearly identical to one in Washington DC. Originally built in 1990, new additions to the facility, including a Baptist church, a police station and several farmhouses, have transformed the layout of the once “international” town.

According to the military whistleblower who provided the documents to Infowars, U.S. Marines at the facility have been tasked with training soldiers, law enforcement agencies and Homeland Security in skills such as fighting in wooded areas, urban patrolling, forcible entry and night fighting techniques. The facility is also being used to cross train foreign troops from the United Nations and NATO. An aerial photograph of the training center reveals the location of several new structures including a water treatment facility, railroad tracks and the aforementioned farmhouses and police station. Although the map makes no mention of the Baptist church, several accompanying photographs show the church’s location. A seperate aerial photo shows several of the town’s other features including a bank, soccer field, a bridge capable of accommodating an “M-1 tank” and a high school. According to a 1989 press release that mentioned the facility’s original structures, the high school’s gymnasium “can be used as a holding area for ‘evacuees’ or as a detention center for prisoners of war.” Just last February, the U.S. Army unveiled a similar 300-acre urban training center in Virginia, complete with a Baptist church and underground subway system nearly identical to one in Washington DC. After months of being stonewalled, Infowars’ reporters David Knight and Staff Sergeant Joe Biggs traveled to the facility this week and uncovered several other suspicious structures.

While attempting to locate military personnel for an interview, both Knight and Biggs were detained by police and escorted to the base’s headquarters. Alex Jones contacted Fort AP Hill’s public information officer, Bob McElroy, to learn the fate of his reporters and to inform McElroy of the facility’s nefarious background.