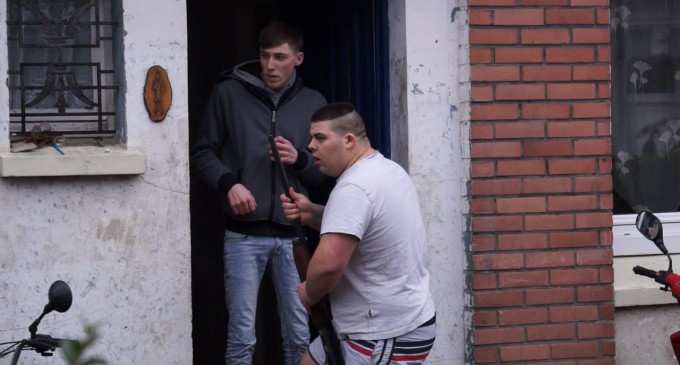 A video has emerged on YouTube of a mob of migrants and anti-borders activists descending upon the home of a family in Calais, France. The mob was composed primarily of anti-borders protesters from France, the Netherlands, the UK, Germany, and Belgium, as well as migrants living at The Jungle refugee camp.

The protesters arrived by the bus load and proceeded down Rue Millien, when a contingent of protesters and migrants apparently broke away to march down a number of residential streets. A family stood outside the gate of their home, presumably to watch the crowd go by, when tensions began to rise. The crowd began throwing rubber tires and a white metal rod was exchanged from the crowd, to one of the family men, and back to the crowd.

Someone in the mob yelled “Nazi scum!” at the family as a little girl stood confused and scared by the doorway, watching this crowd hurl insults, threats, and whatever they found on the ground at her family. One man emerged from the house brandishing an air rifle.

Read more and see the video on page 2.