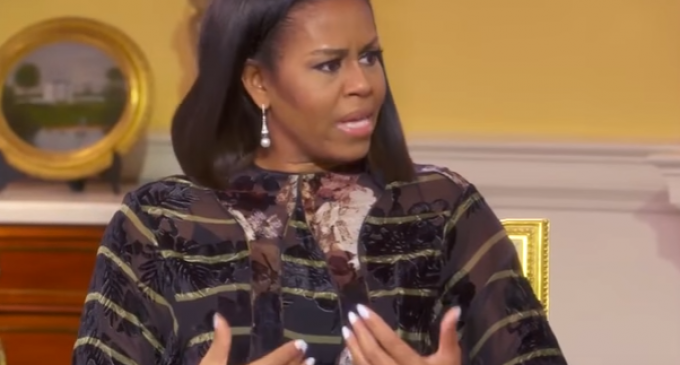 According to Michelle Obama, the thing that defines us the least as people is the color of our skin. That would inspiring had she not spent the past eight years making such a huge deal out of the color of people's skin. And this is one of those topics that can't be labeled as conspiracy because you can watch just about any interview or special appearance she's made over the course of her husband's time in the White House and hear her race mongering. For example, that time she visited Target and was asked to help somebody. According to her it happened because of the color of her skin. Never mind the fact that she was wearing a red shirt.

Or how about that time she went on an anti-white rant at a commencement ceremony for Tuskegee University? According to her, white people are the reason black people can't find jobs, which is weird because there are quite a few black people in the workforce, and you won't find any white person stealing jobs because many statistics show, white people to be far more lazy when it comes to unemployment and job searching.

Then there was that time that Michelle Obama was invited to a museum opening and instead started to rant about how museums are only for white people. So naturally when Michelle Obama denies being an angry black woman, you can't help but say bulls**t!

Check out her interview with Oprah on the next page.