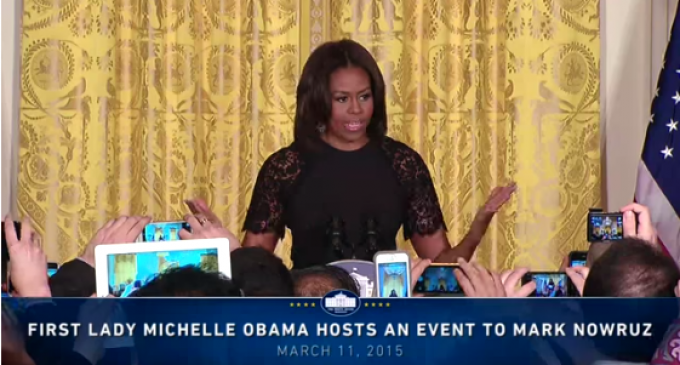 In an obvious attempt to appease Iran as wells as her husband's apparent desperation to empower Iran with nuclear capability, Michelle Obama recently hosted Nowruz, an Iranian spring festival which marks the beginning of the Persian New Year, at the White House.

As White House Dossier points out:

No, this is not about Nowruz. This is a clear attempt to appease the Iran government, and it is exactly what is wrong with President Obama’s approach to Iran and the rest of the world. It explains why Iran has been able to extract a deal that will allow the centrifuges to keep spinning and, ultimately, a bomb to be built.

What tyrants respond to is strength. Malice. Threats. Force. They do not love, and they do not seek to be loved.

When Qadaffi gave up his nuclear program after Bush invaded Iraq, it wasn’t because Laura Bush celebrated a Libyan holiday.

Our attempts to placate evildoers with something like a Nowruz festival invite only contempt. It confirms for them that we are weak, and that they can take advantage of us.

We are, as these things go, a nice people. Some of us, mostly on Left, tend to think the rest of the world is nice too. It’s not.

It is, actually, no more than self-indulgence to assume others are like us. It is hubris. The hubris of someone like Obama.

Israeli Prime Minister Netanyahu, who understands the neighborhood in which he lives, came here to warn America. Obama didn’t even bother to watch the speech. Because it contradicts his world view.

One day, quite possibly, hundreds of thousand or even millions will die because of the deal Obama is about to strike. Those people may be Americans.

Because Peace through Weakness is a deadly way of doing business.