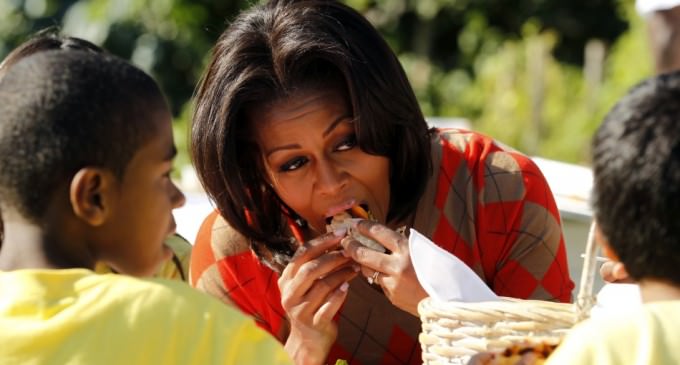 Michelle Obama's pet project for her time as First Lady is called “Let's Move”.  Let's Move was a slogan for Michelle to set her sights on the obesity problem in the US and target children.  Let's Move became synonymous as a campaign to have governmental intrusion into every aspect of what kids ate, over riding in many news stories parental rights.  News stories with parents who become enraged when their child's lunch was rifled through by teachers, the outcome being a note sent home to alert the parent that too many carbs or not enough veggies were in the lunch, to parents being harangued, having to meet with school officials.

Let's Move continued on.  McDonald's and many fast foods felt the Michelle heat, trading their happy meals from french fries to apple slices.  Recently news was reported that McDonald's has lost billions to the change in menu.  The whole Let's Move movement is progressive politics at its worse.  It goes further.  When government comes into the family kitchen, its time for people to kick them the heck out.

With the Obama's laser focused on their “legacy”,  a report from Journal of American Medical Association (JAMA) came out with a study that stated children between two to 19 years of age obesity rate remained roughly 17%.  This report was a small sampling, and the politicization which followed, is scandalous.  Michelle Obama wanted to show something, anything that would prove her Let's Move program was working wonders.   Michelle and her team decided to use that report (JAMA) and make it a reflection on Let's Move.

Forgetting any of the facts in the report, twisting the report and inventing a new narrative, has been the work of those at the HHS and the CDC who will skew anything and write anything to back up what the Obama's claim to be true.  Thankfully news agencies followed through and requested Freedom of Information Act (FOIA) on the Let's Move program.

see the falsified narrative by Michelle Obama next page