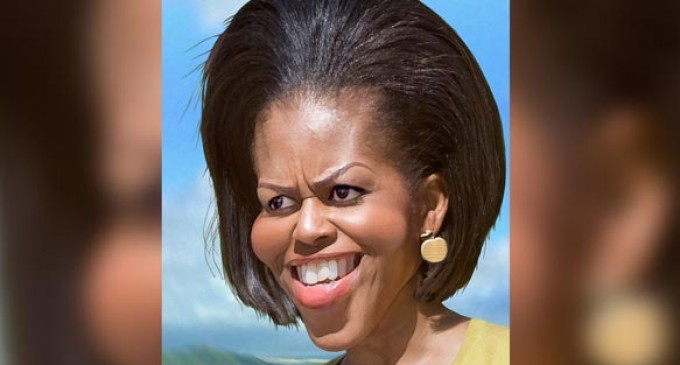 First Lady Michelle Obama took time out of her busy vacation schedule to stop by Peking University and ‘educate’ students there about freedom of speech and, strangely, rule of law, saying,

” That’s why it’s so important for information and ideas to flow freely over the internet and through the media, because that’s how we discover the truth. That’s how we learn what’s really happening in our communities in our country and our world. And that’s how we decide which values and ideas we think are best–by questioning and debating them vigorously–by listening to all sides of an argument and by judging for ourselves. My husband and I are on the receiving end of plenty of questioning and criticism from our media and our fellow citizens and its not always easy, but we wouldn’t trade it for anything in the world, because time and again we have seen that countries are stronger and more prosperous when voices and opinions of all their citizens can be heard. And as my husband has said, ‘We respect the uniqueness of other cultures and societies but when it comes to expressing yourself freely and worshipping as you choose and having open access to information. We believe those universal rights–they are universal rights that are the birth right of every person on this planet.”

The notion of the Obama regime supporting free speech, particularly in journalism or on the internet is dubious, at best, since this is the same administration that has a Department of Homeland Security responsible for shutting down dozens of websites and other agencies installed as “Super Flaggers” on YouTube to target videos and even whole channels, such as Mark Dice’s anti-Illuminati channel for censorship.

Surely Chinese students are smart enough to know when they’re being handed a pack of lies, as in this case. Michelle Obama’s suggestion that her husband’s presidency supports freedom of speech is at odds with the insistence by long-time democrat Dianne Feinstein that the government should have the ability to define who is a ‘real journalist’ covered by freedom of the press, for example.