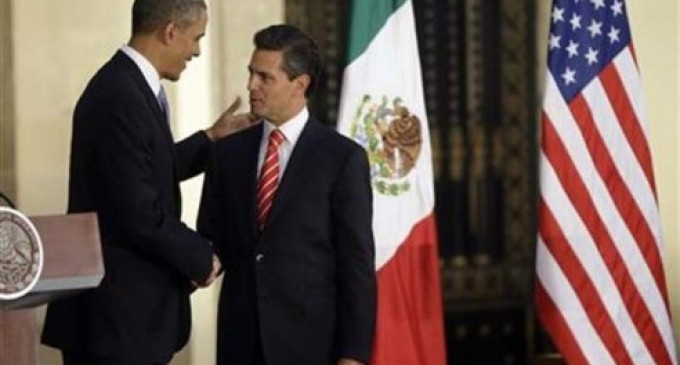 This past Monday Mexican President Enrique Peña Nieto and Guatemalan president Otto Perez Molina signed  the Southern Border Program to Improve Passage, which provides protection and care to migrants making their way north to America – aiding the flood of illegals to enter our country.

These illegals actually receive a Regional Visitor's Card, which allows them 72 hours to cross Mexico and reach our border, which is sufficient time when taking the train.

This is all part of a plan to forward the North American Union, which was exposed by Lou Dobbs years ago as “the end of the United States as we know it,” signed by George Bush. This plan joins the US, Canada and Mexico into one entity and will effectively kill our Constitution. After Dobbs exposed this he and his family were shot at in their home.

The program will also give special protection and even financial assistance to unaccompanied minors now pouring across our border. Of course, these efforts, chiefly by the Mexican government, will only increase the number of illegal aliens coming to this country by the thousands, now on a daily basis.

The official announcement only confirms what many of us have known all along…the current chaos on the border which the Obama administration has sympathetically (and dishonestly) characterized as a “humanitarian crisis,” only exists due to collusion between the governments of Mexico, Guatemala and likely the United States.

You see, unlike the United States, Mexico actually defends their southern border…

In September 2010, the head administrator of the Mexican Superintendency of Tax Administration, Raul Diaz, told theInter-Press Sevice (IPS) that his government was building a wall in the state of Chiapas, along the Mexican/Guatemalan border. The official reason given was to stop contraband from coming into Mexico, but as Diaz readily admitted: “It could also prevent the free passage of illegal immigrants.”

The President of the Republic shall have the power to expel from national territory any foreigner, according to the law and after a hearing. The law shall establish the administrative procedure for this purpose, as well as the place where the foreigner should be detained and the time for that. Foreigners may not in any way participate in the political affairs of the country.

Of course, in the U.S. illegal aliens are not only free to stay without fear of deportation, but they now protest openly, regularly invading Congressional field offices to demand amnesty legislation, as well as actually physically blocking the entrances and exits of the Washington D.C. headquarters of U.S. Immigration and Customs Enforcement headquarters in 2013. 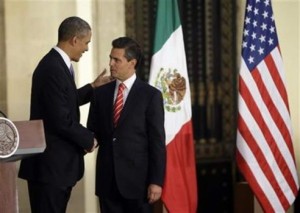